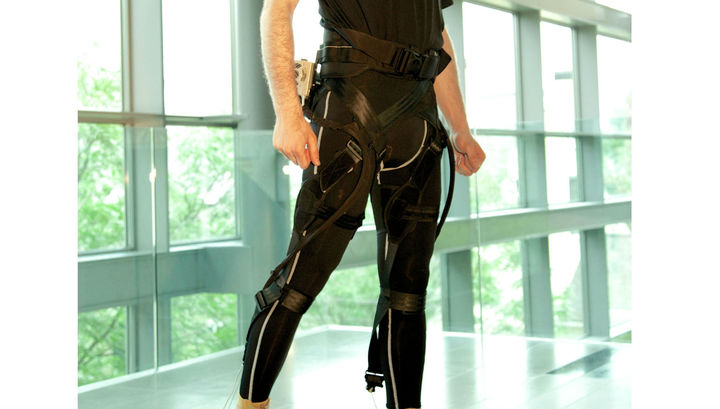 In science fiction books and movies an exoskeleton that helps the heroes to move faster and lift a lot of weight, is often presented in the form of a bulky heavy design, which is worn over the clothes.

But engineers at the Harvard Wyss Institute have teamed up with specialists from the company ReWalk to create a lightweight and soft suit that will help walk people with disabilities of the lower extremities.

Scientists hope that the development of such technologies will help to develop special devices, capable to return mobility to patients who have had a stroke or suffering from multiple sclerosis.

The team of Kathleen O’donnell (Kathleen O’donnell) has spent a lot of time to study in detail the biomechanics of the walk, to understand what makes this process so perfect. In the end, robotics, mechanics, designers, programmers and experts in the field of physical therapy and athletic training have joined forces and produced the first prototype soft robotic suit.

Externally, the exoskeleton looks very compact and more similar to the harness of the climber. But inside the hidden powerful belt drives that provide support for muscles during walking and reduce fatigue.

“Soft exoskeleton is a great example of how understanding the principles of living systems — in this case, the movement and control of the human body, can inspire the creators of innovative wearable robotic technology, which has the potential to change the future of medicine,” says the Director of the Wyss Institute Donald Ingber (Donald Ingber) in a press release.

The new model turned out to be much easier and less known exoskeletons, which sells the company ReWalk. In addition, a more simple design significantly reduces the cost of the device. This is especially important because existing market models compared to the cost of a good car.

However, the most cumbersome and expensive models are designed for people with severe injuries such as spinal cord injury. The authors of the new developments draw attention to the fact that the suit is made for people who can move independently, but are experiencing difficulties related to age and disease.

Scientists hope that the partnership with one of the market leaders will enable them to improve the suit and eventually create a commercial product for use in medicine.

“There is a great need for light and cheaper wearable exoskeletons to support patients after a stroke, people diagnosed with multiple sclerosis and the elderly who need help walking,” explains ReWalk CEO Larry Jasinski (Larry Jasinski). – This cooperation will create a new generation of exoskeletons and will make the technology available to millions of consumers and different groups of patients.”