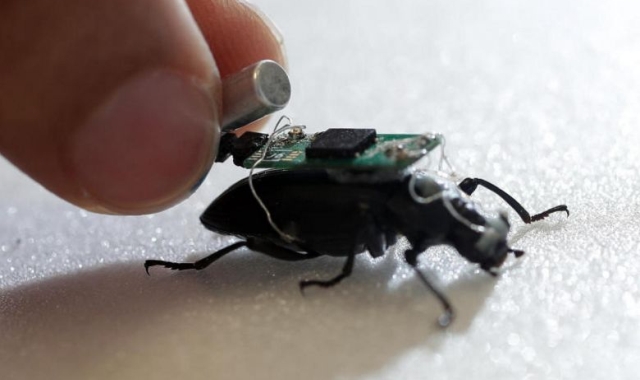 A group of scientists from the Nanyang Technological University installed an electronic satchel on the beetle, turning it, according to researchers, into the smallest cyborg insect.

Beetle can be controlled remotely: make it rotate right-to-left, forward-backward by pressing one button.


In the experiments, insects called the darkling beetles were used. They reach a length of 2 cm. Weight – 0.5 g.

Specialists attached the computer to the back of the insect using wax. The knapsack turned out to be the same weight as the beetle itself.

To the antennae of the insect, electrodes of silver wire were connected.

Computer-generated signals simulated the contact of the antennae with the object. As a result, the insect turned away from the non-existent object, trying to get around it. Thus, the signal to the right antennae made the beetle turn left and vice versa.

Currently, the computer on the insect is powered by two 1.55-volt battery-coins. The battery life is up to 8 hours. The researchers plan to increase it to three days, by resorting to a biofuel element that uses glucose in an insect.

Now experts are also engaged in the development of miniature sensors capable of detecting carbon dioxide, detecting temperature and detecting heartbeat, which will allow the use of cyborg insects in rescue operations.