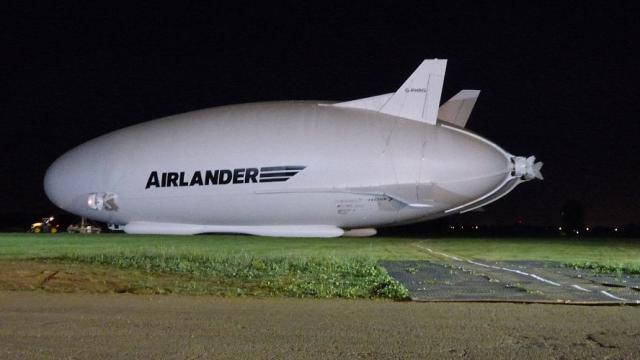 The world’s largest aircraft rolled out of the hangar in the British city of Cardington, Bedfordshire. The creation of the apparatus had cost £ 25 million, but construction dragged on for 10 years.

The hybrid airship has a length of 92 m. Its width is 43 m and a height of 26 m. the Volume of the aircraft reaches 38 thousand cub. m Airship has a reservoir with a volume of 28 thousand cubic meters, filled with helium.

Initially the machine was developed for the U.S. military, but they abandoned the project in 2012. In the end, the project became interested in a company that specializiruetsya on transport of goods by air. The aircraft was first named Airlander 10, however, in April this year it received another name – Martha Gwyn in honor of the wife of the President of the company Hybrid Air Vehicles.

Machine without passengers can be controlled remotely for three weeks. It is assumed that the airship will make its first flight later in August this year. During the test, he will have to rise to a height of 1.2 thousand meters and reach speeds of 74 km/h.

Airlander 10 has four four-liter eight-cylinder turbo engine capacity of 325 HP each. They allow the machine to reach speeds up to 148 km/h. it is Reported that the hybrid airship will consume 60% less fuel compared to aircraft. Airlander 10 can carry 48 passengers.