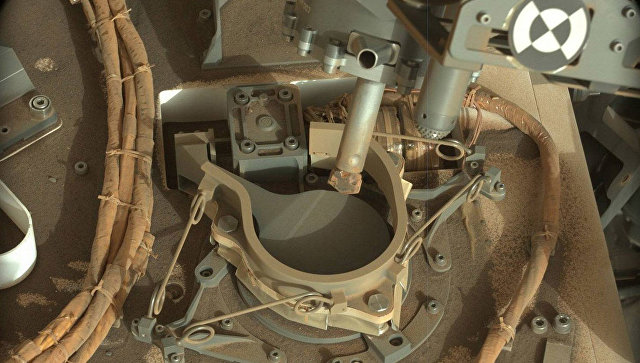 The Curiosity Rover for the first time in the past year has successfully analyzed a sample of soil produced by a rig that was repaired in December 2016, according to the NASA Jet Propulsion Laboratory.

“The scientific team was confident that the engineers would not fail – we were so convinced of it that we went back to the point where we wanted to take samples more than a year ago.” This gambit proved itself, and now we have one of the key pieces of the history of Mars, which would remain inaccessible to us in another case, “said Ashwin Vasavada, head of mission Curiosity.

In December 2016, a robotic arm Curiosity crashed, associated with a drilling rig, a key part of the SAM chemical laboratory. During the sampling of the rock specimen, the seventh in the course of the Curiosity work on Mars, the rover transmitted to Earth a signal about the failure of the mechanism, which should pull the drill bit from the rover’s “arm” while drilling, and draw it back after the completion of this operation .

Last autumn, the engineering team found a witty solution to this problem – they refused to use the drill engine, retractor mechanism and associated stabilizers, shifting all these tasks to the high-tech “arm” of the rover, which is equipped with an even more advanced engine complex.

At the end of May this year, engineers gave the go-ahead for conducting “field tests” of the drill, the first “victim” of which was a cobblestone, named “Duluth”. The layers of clay and other sedimentary rocks preserved inside this stone, as Vasavada notes, forced the mission’s leadership to return to it, despite the fact that during the repair of the drill the rover moved a few hundred meters towards the top of Mount Sharp.

Having successfully drilled this piece of rock, engineers and scientists began to solve the following problem, which resulted from the breakdown of the standard drilling mechanism – they had to come up with a new system for the delivery of samples to the main part of the SAM.

Previously, the rover simply “immersed” the drill into the laboratory and shook it, getting a bunch of dust with a clearly defined mass and volume. Now scientists are forced to conduct such a procedure manually, arranging a kind of “dusty rain” above the SAM inlet and observing by eye how much dust enters the sample receiver.

A similar technique, as noted by Vasavada, worked well on Earth during experiments with a copy of Curiosity. Nevertheless, the scientific team was not completely sure that it would work on Mars with its extremely rarefied atmosphere. Excessive amount of dust inside the receiver could disable it, and a small mass of samples would render them useless from a scientific point of view.

Their fears were dispelled at the end of last week, when they successfully transferred part of the fragmented “Duluth” into the chemical laboratory, using the rover’s “hands” engines and an updated control program for it. As Vasavada and his team hope, subsequent soil sampling attempts will prove even more successful, which will help the rover to fully restore its scientific “repertoire.”