Danish scientists on the verge of creating a cure for HIV 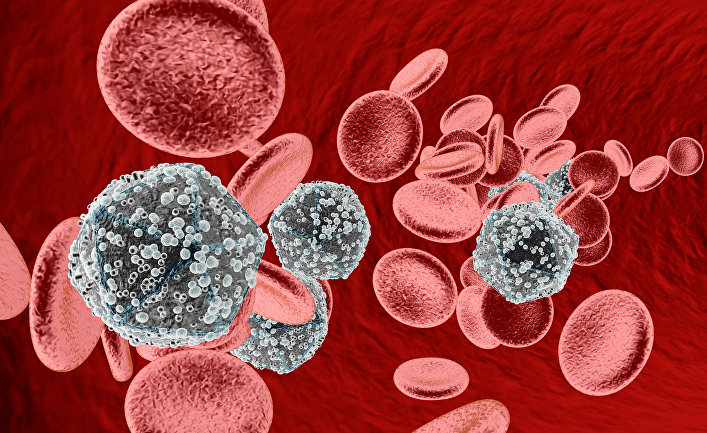 Scientists from Aarhus use the anticancer drug to identify HIV, making it visible to the immune system. A new study has shown that this method can be used for the destruction of virus-infected cells.

Although modern doctors have learned to keep HIV under control, there is still no such medicine, which is completely banished HIV from the body.

The fact that HIV is arranged in such a clever way that may be hiding in your own cells of the body, thereby becoming “invisible” to the immune system.

Researchers at Aarhus University hospital, however, has substantially succeeded, trying to remove HIV from its “cloak of invisibility” and pulling him into the light. In their new study, the researchers used a cancer drug to make HIV visible, and this has ensured that the own immune defense of the body destroyed almost 40% of HIV-infected cells.

“We hoped that it will be possible to get rid of some HIV-infected cells. But we did not expect that we will have the chance to destroy a large part of them, as the result was,” says Steffen Years (Steffen Leth), doctoral candidate of the Department of infectious diseases Aarhus University hospital.
He is one of the scientists who conducted the study, which was published in a well-deserved scientific journal The Lancet.

The achievement has attracted international attention

Chase the Aarhus group for the cure against HIV has caused outcry in the international media, especially in the scientific communities dealing with this virus. When in 2014 oruscy presented preliminary results of his research at the international AIDS conference in Australia, the hall “was a loud sigh”, as he wrote to the foreign press.

At that time oroszi was able to test anti-cancer drug romidepsin only six patients with HIV, but the experiment showed that the drug can be used to identify infected cells.
“In the first study we learned that can activate HIV, which until then was dormant and hiding in the cells of the body, — to the extent that we can measure virus particles in the blood using conventional methods of measurement. So it was not new for us”, says Steffen Years.

In the new study, researchers tested romidepsin on a larger number of patients infected with HIV — just experiment was attended by 20 people. The new results also confirmed that romidepsin able to activate latent HIV and to “draw him out” so that the viruses became possible to measure in the bloodstream of the patient.

But new results are not limited. Because this time the scientists went further and were able to push their own immune system to the fact that she destroyed a decent portion of cells infected with HIV.

“We are still far away from creating the actual medicine that could fully free the body from HIV. But that’s our main goal, we will continue to work on and will try to improve our method,” says senior researcher OLE Smelt Sugar (Ole Schmeltz Søgaard), which acts as the main driving force of the Aarhus project on HIV.

Professor, University of Copenhagen Jens Lundgren (Jens Lundgren) also emphasizes that before the creation of this medication against HIV is still “a long, long, long way.” But at the moment, the Aarhus scientists have on him came, says Jens Lundgren.

“In finding a cure against HIV, scientists at the Aarhus really far gone. They managed to create a research platform in Skejby (suburb of Aarhus), which will allow to carry out further studies of this type and experiments, which gave rise to difficulties in other countries. So Aarhus is now at the forefront in this field is recognized worldwide,” says Jens Lundgren, who was himself a distinguished scientist in the field of HIV research, but not involved in this project.

How does cancer drug

The experiments of the Aarhus scientists have shown that the cancer drug romidepsin can activate HIV, which is normally hidden in the genome of the cells of the body. When the source is activated, the virus is selected in the bloodstream, according to scientists, leaves a mark on the outside of infected cells.

This means that suddenly it became possible to distinguish between healthy and HIV-infected cells, and therefore, the killer cells of the immune defense theoretically can track and destroy infected cells.

But in the first study of action of romidepsin scientists have been unable to identify a single sign that the immune defense of the body can actually destroy the infected cells. Although cells infected with HIV were seen, less they did not.

“We assumed that immunity simply was not enough to destroy the cells with HIV. Then we were thinking how we could lend him a helping hand,” says OLE Smelt Sugar from Aarhus University hospital.

The vaccine boosts the immune system

In the new study, researchers gave patients a vaccine that, in a nutshell, was designed to prepare the immune system to task for the destruction of infected cells.

The vaccine worked a small Norwegian pharmaceutical company, which agreed to let the Aarhus scientists to test their drug.

“We give patients with HIV the vaccine in six receptions, spurring the immune system to find and destroy the cells with HIV. Thus, our experiment is a combination of the two agents: we on the one hand stimulate the immune system, and on the other use romidepsin that would make it possible to detect cells infected with HIV,” says Steffen Years. He adds: “This is the first combination study, which were affected by the total number of cells infected by HIV in the body. We saw that the number of infected cells in the body have decreased by almost 40%”.

Criticism over the lack of control group

Professor Jens Lundgren believes that the new scientific work is very interesting and well done, but he not only applauds the successes.

“If you show a little skepticism, we can ask why the experiment was not in the control group (the group of people who did not take the drug approx.ed.). Thanks to the control group could see exactly what changes are associated with treatment and any accident. This is a common technique used in these types of research,” says Jens Lundgren. He adds: “more importantly is that they have achieved a 40% reduction in the number of infected cells. But how many percent should actually be destroyed to cure HIV? We know that even a very small amount of HIV can grow again and spread throughout the body.
So if we want to find the cure, we must find ways to detect and destroy all cells with HIV in every area of the body. And this, I think, really difficult. But it’s not the same as impossible. In any case they made a big step in the right direction.”

When we have a cure for HIV?

Scientists at Aarhus themselves emphasize that they are only in the beginning of the path, and this path is slow and there is no certainty that their study will be a breakthrough.

Well, if everything goes the way I want and hope to scientists, when can we expect a cure for HIV?

“This is a very good question that is often asked of me, but I simply can’t give him a concrete answer. The forecast is associated with a lot of unknown. But if we talk about some expectations, few hopes that it will happen in the next five years,” says OLE Smelt Sugar.

At the moment, the Aarhus scientists are working on a new experiment in which they focused on how to find the best way to destroy HIV-infected cells. They just received an international grant of 19.2 million DKK from the international Department of the pharmaceutical company Gilead Sciences that contributed to the continued search for a cure for HIV.