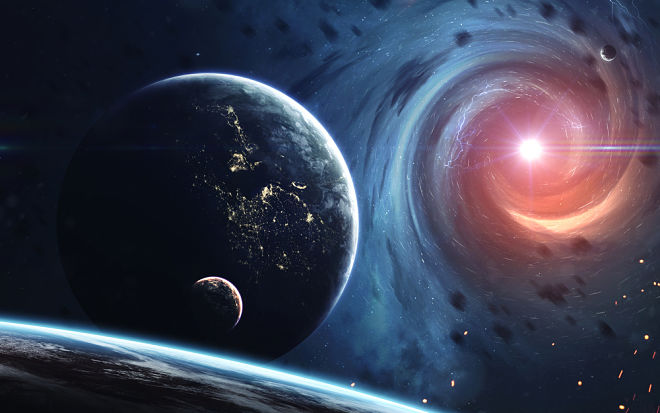 Scientists have long believed that the universe is expanding, but eventually slowing down. When the Hubble telescope began to observe the space, he discovered something strange: the Universe did not slow down, but expanded with acceleration. It made no sense, and astrophysicists could not explain it.

There were several competing theories, but most scientists agreed that 95% of the Universe consists of dark matter and dark energy that cannot be seen and can only be detected by their influence on visible objects and phenomena.

Dark matter and dark energy were considered separate phenomena, but Jamie Farns, an astrophysicist at Oxford University, believes that they can exist together as a “dark liquid of negative masses.” In this case, the liquid will have negative gravity – instead of attracting objects, it repels them.

The Farns Theory, published in the journal Astronomy and Astrophysics, explains some of the strange properties of the universe. On the one hand, galaxies rotate so fast that they have to break apart, but it seems that the “dark matter halo” prevents such destruction. The new theory suggests that the negative mass of the “dark fluid” may cause the formation of these halos.

However, negative matter suggests that dark energy will become less dense with time, and observations show that this is not the case, and dark energy remains relatively constant. Therefore, Farnes uses the “creation of matter” theory, according to which more and more material is being produced that replenishes the negative matter, which disappears. His study presents an illustrative concept of the model: the space-time is empty, but behaves almost like popcorn with the appearance of an increasing number of negative masses.

The theory of “dark fluid” is just a theory based on computer simulation and mathematics. Farnes himself warns that it may be erroneous and there are still many tests ahead.

In the European Organization for Nuclear Research (CERN), work is already underway to study the presence of negative masses, similar to those proposed by Farns. Another project, Square Kilometer Array, which will become the world’s largest radio telescope, can also help in finding answers. “We must always push the boundaries of fundamental physics. At first, this seems esoteric and strange, but ultimately penetrates our daily lives, ”said Geraint Lewis, a professor of astrophysics at the University of Sydney.