Deadly battle of the octopus and dolphin 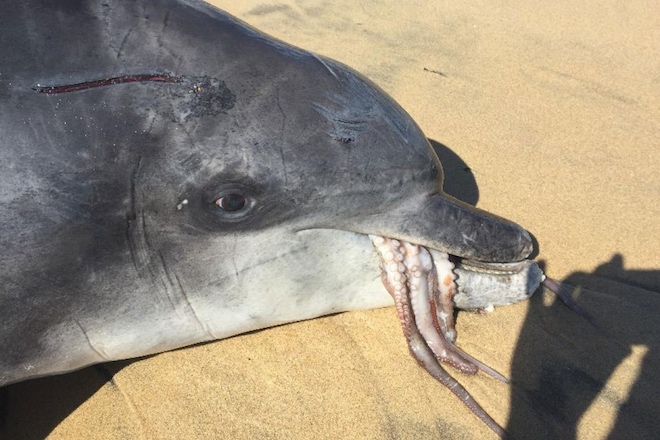 Nobody ever told the dolphin Gilligan not to bite off more than he can chew. The male of the Indian bottlenose dolphin is the first known cetacean, which died, having choked an octopus, the study reports.

“The dolphin was probably very greedy and decided to swallow the whole octopus,” said study lead author Nahiid Stephens, a pathologist at Murdoch University in Perth, Australia. When the corpse of a young male found on the beach two hours’ drive from Perth was brought to the Stephens laboratory for autopsy in August 2015, the pieces of the Maori octopus were still hanging from his mouth.

Previously, other dolphins killed and eaten octopuses, so Stephens conducted an autopsy to find out what went wrong, because the animal that received the nickname Gilligan, was in excellent condition. First, the pathologist had to remove the octopus. “It was a huge octopus. I kept pulling and pulling it and thinking: “My God! It still drags on, “says Stephens, adding that the length of the tentacle of the mollusk was 1.2 meters. 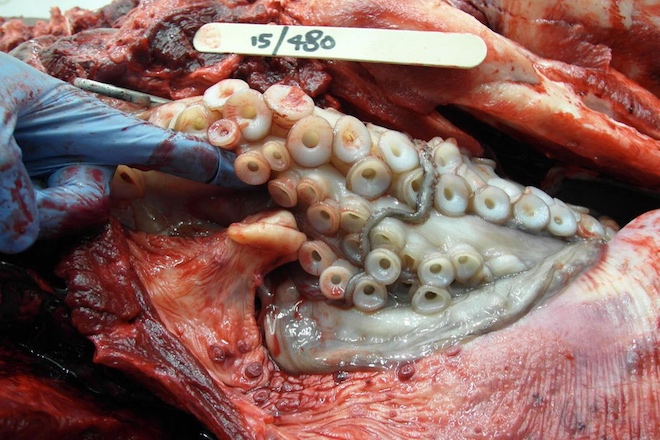 The autopsy revealed that the problems started when Gilligan swallowed what had turned out to be his last lunch. Stephens says that a cephalopod with a weight of 2 kg clung to the larynx of the dolphin with a tentacle, preventing it from rejoining the dolphin breathing apparatus and strangling it to death. “The octopus could be, theoretically, already dead, but the sucker was still functional,” says Stephens.

Kate Sprogis, a researcher at the University of Murdoch, says that the octopus is not an easy prey. Studying the dolphin population near Benbury, where Gilligan died, Sprogis watched as dolphins toss the octopuses into the air in an attempt to “beat off” the invertebrate, crushing it into smaller parts. After dropping their prey, the dolphin usually bites off the octopus’s head, but the battle is not yet over, as the tentacles remain active for some time.

Although Gilligan’s unique death may be the first known scientist, such cases are likely to occur frequently in nature. Ancient sailors told how sperm whales fought with kraken, probably misinterpreting their fights with giant octopuses, says Stephens.