Deadly poisonous fish attack off the coast of Turkey 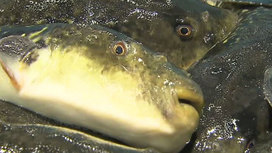 Received messages from fishermen – and came to alarming conclusions. Turkish press – about the unprecedented activity of poisonous puffer fish on the Mediterranean coast. Dangerous animals have been spotted near the beaches of Antalya.

The Turkish press reports on the unprecedented activity of the poisonous puffer fish on the coast. Whole shoals have been found only fifty meters from the beaches of Antalya, so now the locals are sincerely worried whether they will be able to go into the water at all in the summer.

You can understand them – the fish is deadly, and besides, it is still a wonder in the Mediterranean Sea. Previously found only in the Indian and Pacific Ocean. Now he is exploring new territory, and rapidly. The Turkish authorities consider such activity to be threatening, so the country is officially allowed to catch and destroy puffer without restrictions.

Moreover, for each fish caught, they pay five liras, that is, about fifty rubles. However, even such an incentive is clearly not enough to cope with the poisonous shoals. Local pharmacists, who want to try using poison as a medicine, have also promised to make some contribution to the fight. Will it come to serving fugu as a delicacy for tourists and where did it come from in Turkey?

The name “fugu” is purely everyday. And scientifically, these are representatives of the blowfish family. “Puffers are a large family, and several species of them live in the Indian Ocean. The largest of them – the silver puffer – is on the video. And now it was discovered in Turkey along with several other species,” says Ilya Gomyranov, zoologist, employee of the Skolkovo Institute science and technology. – This blowfish is very large, up to 110 centimeters. It is a predator, they have powerful jaws, they feed on mollusks, various crustaceans. ”

There should be no blowfish off the coast of Turkey. But alas, this is the scourge of the Mediterranean: the body of water is considered one of the most polluted by invasive species in the world. And the Suez Canal is to blame for everything. When it was dug, saltier water from the Red Sea began to flow into the Mediterranean. And together with it, the inhabitants of the Indian Ocean swim to the north. Some take root. And, moreover, local ecosystems are beginning to take over.

An example of this is a video taken a month ago: puffers in the Mediterranean attacking sea urchins of the diadem genus. Both those and others here are uninvited guests. “Although the fish is quite sedentary, just imagine: the Suez Canal is a matter of kilometers,” comments Kirill Kuzishchin, professor of the Department of Ichthyology at the Faculty of Biology, Lomonosov Moscow State University, Doctor of Biological Sciences. in six months. And that’s it, it will penetrate into the Mediterranean Sea. And if conditions are right there, resettlement will begin. ”

The emergence of blowfish in the eastern Mediterranean is bad news. Fish is deadly and completely non-commercial if eaten incorrectly cooked. And if you step on a puffer, injuring your skin, then it is quite possible to die …

The fact is that the body, as well as on the surface of the body of fish, contains tetrodotoxin. A familiar word for lovers of detective stories: yes, they are usually poisoned by book and movie characters. And for good reason: after all, tetrodotoxin is one of the most terrible poisons on the planet. It is hundreds of times more dangerous than cyanide and tens of times more dangerous than chemical warfare agents: sarin and VX gas.

“This is one of the most powerful poisons known to mankind,” says Dmitry Mustafin, Doctor of Chemical Sciences, Professor, Corresponding Member of the Russian Academy of Natural Sciences. “The ancient Egyptians knew him as far back as 2 thousand years BC. The first symptoms are nausea, vomiting, diarrhea. Then there is a blockage of the pulmonary system. The muscles of the lungs are paralyzed, and the person dies from lack of oxygen. ”

At the same time, it is already obvious: a large predator off the coast of Turkey has taken root, and in the near future will begin to change the local ecosystem for itself. This will definitely hit the commercial species. And there is even a danger that there will be nothing more to fish in local waters. Except, of course, the bred fugu themselves.

In this case, local chefs willy-nilly will have to master dangerous recipes. And tourists are probably more careful when choosing beaches for swimming. Better not to go into the sea at all.