Deep-sea fish see the world in their own way. 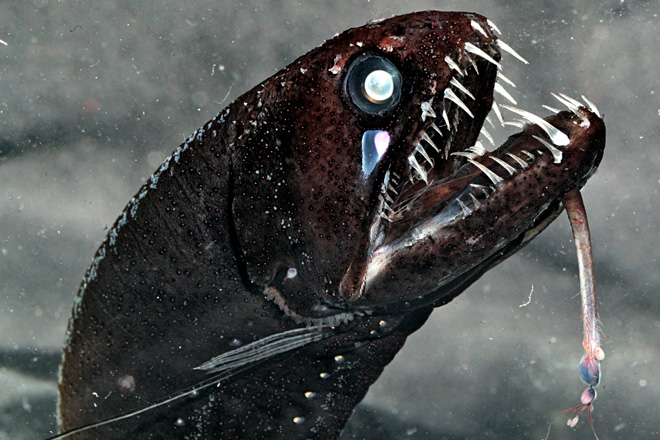 Fish that live at great depths, where the twilight blue turns into black, can see the world, like no other animal known to science.

The light strikes our retina, which contains photoreceptor cells, called rods and cones, which are sensitive to specific wavelengths. Inside these cells are photopigments, or proteins, called visual opsins, which help transform light into understandable signals for the body. As a rule, vertebrates have up to four photoreceptor cones and one rod. Most people see colors from three cones that perceive red, green, and blue. Cones allow us to see colors in bright light, but in dim light we usually turn into color blind and see only the light intensity transmitted by a single stick.

But some deep-sea fish seem to see their world quite differently.

Zuzana Musilova, an evolutionary biologist from Charles University in Prague, and her team analyzed the genomes of 101 fish. At first, scientists noticed that the studied fish lacked the genes responsible for the formation of cones and opsins, which made it possible to see the red and ultraviolet parts of the spectrum, which is not surprising: these wavelengths do not penetrate the sea depths. But then they discovered that some deep-sea fish have additional copies of the genes for observation in dim light. They were especially surprised by the fish of the diretmus argenteus species, which turned out to be owners of the genes of two cones and 38 rods. Such a set makes their eyes the most sensitive to blue color among all known vertebrates.

But even more surprising, Diretmus argenteus still used up to 14 of these genes, and each opsin is tuned to a slightly different wavelength of green or blue. This means that these fish can use their additional genes to detect subtle differences and see the world in shades of blue and green that we cannot even imagine.

Scientists believed that when creatures moved to depth and adapted to dark environments, they lost unnecessary functions, such as vision, especially the genes used to observe color. So what’s the use of copying and storing these genes? With their help, Diretmus argenteus can better detect bioluminescent signals from predators and navigate between different depths. But there may be other reasons that scientists have yet to learn.