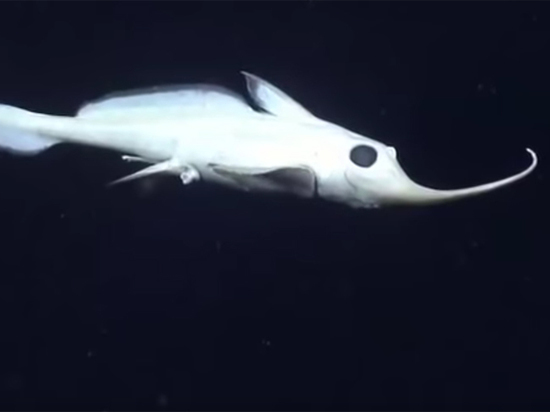 The Internet has spread around the video obtained by experts from the National Oceanic and Atmospheric Administration of the United States. Specialists were able to capture the fish of the species Harriotta haeckeli, mostly inhabiting at a depth of about 2600 meters.

The frames in question were obtained a few months ago, however, due to the Catholic Christmas, they again attracted the attention of journalists and Internet users in general. The fact is that the fish in the video is largely reminiscent of the minor character from the cartoon The Nightmare Before Christmas by Tim Burton, let this character be a dog.

Harriotta haeckeli in English is also called the Smallspine spookfish, which can rather be roughly translated as “ghost fish with a small spine”. It belongs to the horned chimera family and is found in the waters of Greenland, New Zealand, Spain and the USA. The individual, which was able to capture the American specialists, was discovered by them 140 kilometers from the island called Nantucket. In length Harriotta haeckeli reach no more than 72 centimeters.

Today it is assumed that the “ghost fish” in the near future is not threatened with extinction, but some experts fear that in the future, due to pollution and destruction of the natural habitat of these living creatures, the situation may change. Due to the fact that representatives of this species live at great depths, the opportunity to observe them even to scientists seems to be relatively rare.

Recently, the attention of Internet users attracted a video with a rare eared octopus, which was provided by scientists working in the framework of the Nautilus project. Many were touched not so much by the animal itself, also resembling a multiplication character, but by the voices of scientists expressing their admiration behind the scenes.