Degeneration of white people is explained by interbreeding with Neanderthals 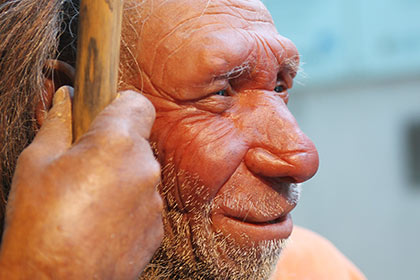 Genetics from Stanford University found that the genome of Neanderthals contained detrimental mutations that reduce the reproductive performance of hominids to 40 percent. Some groups of people have inherited these genes, which continue to have a negative impact on the population today.

Early studies of the DNA extracted from the remains of Homo neanderthalensis, have shown that Eurasian hominids were more related to each other and less genetically diverse than modern humans. For thousands of years, the number of Neanderthals remained small, and the mating between relatives was common.

About 50-100 thousand years ago on the territory of the Neanderthal came Homo sapiens, who mixed with the local hominids. Today, the people living in the Northern territories, carry a small portion of Neanderthal DNA (about two percent), which is placed in certain locations of the human genome. Its preservation in Homo sapiens could be the result of natural selection, which left a neutral and positive mutations and gene cleaned from harmful. However, the Neanderthals due to the small number of their population played a large role not natural selection, and random events, leading to the weak preservation of harmful mutations.

The researchers used a computer program to model accumulation of mutations in the evolution of Neanderthals and he estimated their number, which was then inherited by the people. According to the results of the analysis, the combined effect of weak harmful changes in DNA led to loss of reproduction of Homo neanderthalensis by 40 percent.

Although most of the harmful mutations would be lost in the process of natural selection, a small part is probably preserved in the modern Homo sapiens. Estimates of genetics, people of non-African origin for one cent less reproductive because of Neanderthal heritage.

Scientists believe that their work helps to develop measures to rescue the degenerating of minority groups, in which acute problems of inbreeding (inbreeding), low genetic diversity and the accumulation of harmful mutations. One of the solutions may be interbreeding with other populations.