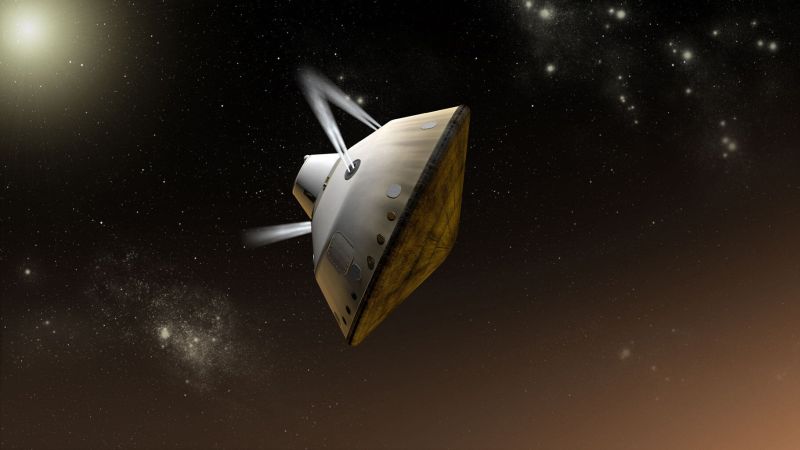 The heaviest machine that made a successful landing on Mars at the moment is the Curiosity rover, which weighs about one ton. Sending more ambitious robotic missions to the surface of the Red Planet – as well as ultimately manned missions – will assume a large payload mass, ranging from 5 to 20 tons. To plant such heavy vehicles, it is necessary to carefully develop a landing strategy. That was the purpose of the new study.

Usually, when a spacecraft enters the Martian atmosphere at supersonic speeds of more than 30 max, it quickly slows down, opens the parachute for even more effective braking, and then uses rocket engines or air-dampened pillows to complete the landing.

“Unfortunately, parachute systems do not scale well up in size with increasing mass of the landing gear. The new idea is to abandon the use of a parachute in favor of more powerful rocket engines for braking, ”said one of the authors of the work, Zach Putnam, an assistant professor in the department of aerospace engineering at the University of Illinois in Urbana-Champaign, USA.

The problem with the use of brake rocket engines is the need to deliver to Mars additional mass, which does not apply to the payload.

The proposal of Putnam and his colleagues is to shift the center of gravity of the apparatus during landing. First, landing is performed vertically, which ensures maximum braking at the first stage, and then, when the speed drops to a certain value, the change in the center of gravity of the vehicle changes the angle of its velocity vector, and further landing takes place at an angle to the surface, significantly different from the right angle. This allows you to maximize the braking efficiency in the lowest, densest layers of the planet’s atmosphere and reduce the amount of fuel required for rocket engines with large masses of landing gear, shows Putnam in his work.

A study published in the Journal of Spacecraft and Rockets; main author Christopher G. Lorenz.