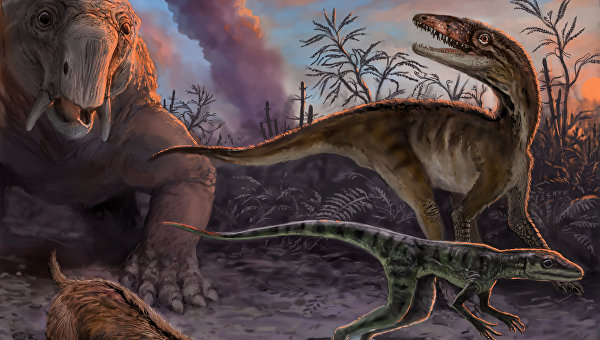 The strongest global warming caused by massive volcanic eruptions in India at 68.7 million years ago, had weakened the dinosaurs and made them vulnerable to the Cretaceous-Paleogene extinction event, caused by a meteorite.

“We found that the mass extinction of animals at the end of the Cretaceous was caused by a combination of volcanic activity and meteorite impact that caused a kind of Boxing “double blow” the dinosaur,” said Peterson of the Sierra (Sierra Petersen of the University of Michigan in Ann arbor (USA).

The majority of paleontologists and geologists today believe that the last mass extinction of animals on Earth, which occurred 65.5 million years ago was caused by an asteroid impact left a giant 300 mile crater in Chicxulub in southern Mexico. His fall no doubt, but its role in the extinction of dinosaurs and marine reptiles is still a matter of debate.

For example, in 1989 known paleontologist mark Richards of the University of California at Berkeley (USA) presented an alternative explanation for the extinction of the dinosaurs – in his view, the reason for their disappearance was the massive outpouring of magma and volcanic eruptions on the site of the modern plateau the Deccan in India, which occurred around the same time. According to his calculations, such events should occur every 20-30 million years due to the rise of hot magma flow, the so-called “plume”, from the depths to the surface of the Earth.

Peterson and her colleagues found new arguments in favor of this theory, and were also able to associate it with the fall of the asteroid, studying the shells of mollusks that lived in the vicinity of the island of Seymour off the coast of modern Antarctica is approximately 69-65 million years ago.

How to tell the scientists that the shells of mollusks and the shells of plankton are a kind of climate record. It reflects the climate of the era and his sharp fluctuations in the form of changes in the ratio of various isotopes in strata – calcium, carbon, oxygen, and other elements, whose share depends on the temperatures of the wealth of nutrients and other climatic parameters.

The authors of the article used as such an indicator, as it is assigned two heavy isotope carbon-13 and oxygen-18 in the shells of these ancient mollusks. This allowed them to calculate the exact proportion of these elements and use them to assess how changing the temperature of the water in the oceans of the Earth in the late Cretaceous period (it is directly reflected in the share censored-18 in the shells of mollusks).

These measurements showed that the Earth’s oceans experienced during the Cretaceous-Paleogene extinction event not one but two sharp flashes of warming, during which the water temperature in Antarctica increased by 3-8 degrees Celsius.

The first one is rather strong and sharp, occurred about 68,7 million years ago, that time corresponds to the mass eruptions on the Deccan plateau. At this time, the temperature of polar waters increased from 4 degrees to 14-15 degrees Celsius that lasted for about a million years, after which the temperature returned to normal values. During this warming 10 out of 24 species that lived on the island of Seymour, disappeared from the face of the Earth.

The second episode of warming occurred about 65.7 million years ago, at the same time or approximately 150 thousand years before the fall of the asteroid. At this time ocean temperatures increased by 6-7 degrees, and remained anomalously warm over the next 200-400 thousand years. This event is “finished off” remaining on the island of Seymour, making it virtually uninhabited.

Such a picture, as I think Peterson and her colleagues provides evidence in favor of the combined participation of volcanoes and asteroid in the extinction of the dinosaurs – the outpouring of magmas in India and the associated sharp warming weakened the flora and fauna, and the fall of the asteroid, accompanied by, according to the water temperature fluctuations, a new episode of volcanism, “finished” them.