Disclosed cause of the “zone of death” inside the tornado 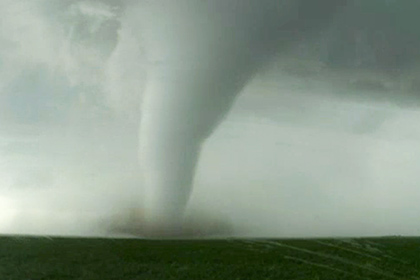 Scientists from Concordia University (Canada) found the cause of the “zone of death”, that is, the region with low temperature and density, inside the tornado.

“Because air pockets (alternating ascending and descending flows in a turbulent environment — approx. “Of the tape.ru”) moves from the external periphery of the vortex to its center, they expand, causing the temperature and density fall,” notes the study’s lead author Georges Vatistas. He noted that his team “were able to determine the cause of the temperature drop inside the vortex for the first time in history.”

Scientists carried out computer simulations showed that the temperature inside the tornado fell from 27 to 12 degrees Celsius, and in the center of the storm the air density has decreased by 20 percent. Approximately the same conditions, as the experts, have a place in the mountains at an altitude of about eight kilometers.

Thus, scientists have solved a longstanding mystery associated with the tornado that struck in 1955 in the city of Scottsbluff in Nebraska (USA). Then in the center of the storm was recorded a sharp decrease in temperature and oxygen content.