Discovered a new amazing ability of the fungus, turning ants into zombies 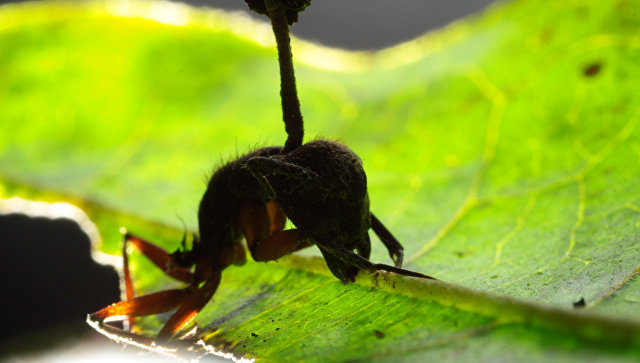 Parasitic fungi of the genus Ophiocordyceps, turning ants into helpless zombies, take into account current weather conditions and cause the insect to die where it will spread the maximum amount of its spores during the summer or autumn.

“In warm weather,” zombie “ants cling to leaves, but when the cold comes they die, clinging to their logs bark or branches of trees.This is due to the fact that at the end of summer, leaves and wands are in all around the anthills, and late autumn, When trees drop leaves, ants begin to cling to twigs and even turn around them if they can not hold onto anything, “says Raquel Loreto of the University of Pennsylvania in Philadelphia, USA.
Evolution of zombies

In recent years, biologists have discovered dozens of examples that parasites can directly control the behavior of the host. For example, the LdMNPV virus can make caterpillars of silkworms climb up trees and turn into a “virus bomb”, and the larvae of flies-humpbacks cause bees to escape from the hive. The cat’s parasite of toxoplasma can “reprogram” the memory of man and mice, making the former prone to suicide, and the second – fearless.

The most “advanced” and interesting example of such parasites are fungi of the genus Ophiocordyceps, affecting ants living in the tropical forests of South and Central America. When this “zombie” fungus penetrates the ant’s body, it radically changes its behavior, causing it to attach to branches and leaves of trees over an anthill and over the paths through which ants go in search of food in the forest.

As Loreto and her colleagues learned a year ago, Ophiocordyceps is able to directly control the work of insect muscles, turning them into helpless “captives” inside their bodies. At the same time, he acts in an extremely selective way, checking their brains for compatibility before “zombification.” If these fungi themselves did not suffer from parasites, then they could easily destroy almost all the colonies of ants in the New World.

Loreto and her colleagues discovered another unusually “advanced” feature of these parasites, investigating a strange case of “wrong” zombification, about which Kim Fleming, an amateur naturalist from the United States, told them. Next to her house is an anthill, whose residents were recently struck by an unusual epidemic of “zombie” -crop.
Dawn of the Living Dead

The victims of Ophiocordyceps, as Fleming observed, strangely behaved at the time of death – they were attached not to the leaves of the tree, but to its twigs, turning around them, rather than fixing themselves with jaws, as do their tropical “relatives” in Brazil and other countries South America. 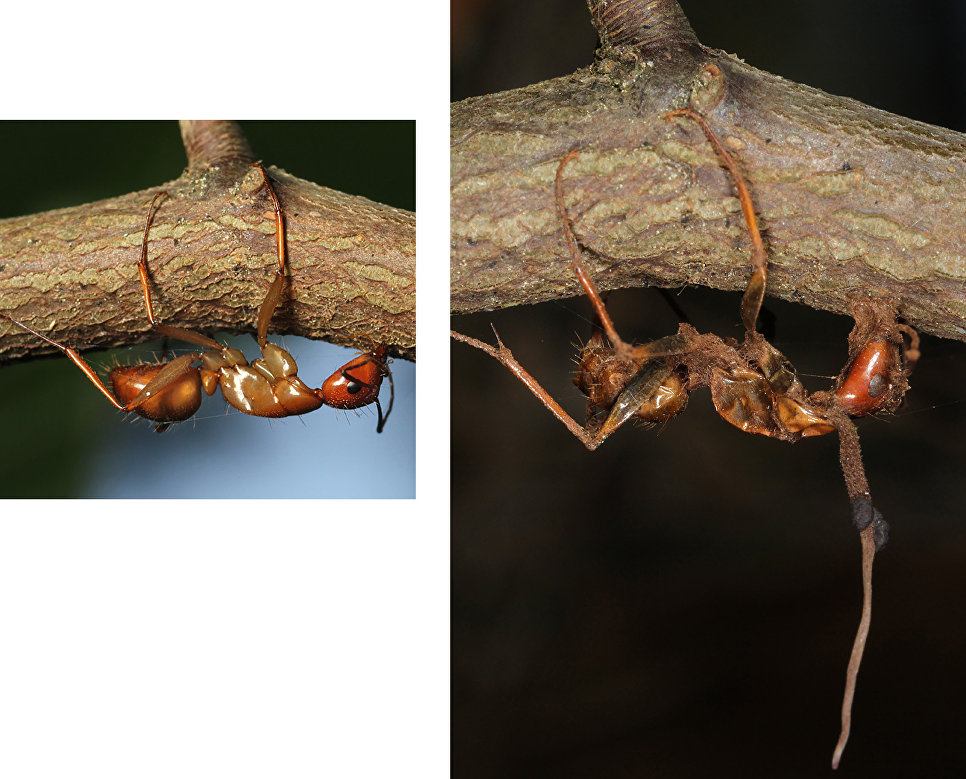 Ants killed by Ophiocordyceps in the cold season

So “wrong” behavior of the fungus interested scientists, and they tried to uncover the roots of this anomaly, deciphering and comparing the DNA of different strains of Ophiocordyceps living in the US and in the tropics. As it turned out, the parasite developed an unusually complex strategy for managing ants, learning how to change it depending on what weather conditions it is in.

Such a skill, as shown by the comparison of genomes, appeared in the zombie fungus not immediately after he learned to infect ants, which happened about 40 million years ago. While scientists note that the planet was mild and warm climate, and therefore the fungus did not need to know what temperatures and weather reign “outside”.

Approximately 20 million years ago, as DNA analysis shows, the situation has changed, and the fungus has learned to determine the conditions under which it lives, and the ancestors of modern species Ophiocordyceps acquired this skill in two different places – in Japan and North America.

What is remarkable, at the same time the Aquitaine cooling began, during which temperatures on the planet dropped sharply. This marked the beginning of the transition from the “greenhouse climate” of the ancient Earth to the cold climate of our time, and was the reason for the birth of a new species Ophiocordyceps, Ophiocordyceps kimflemingiae, named after Kim Fleming.