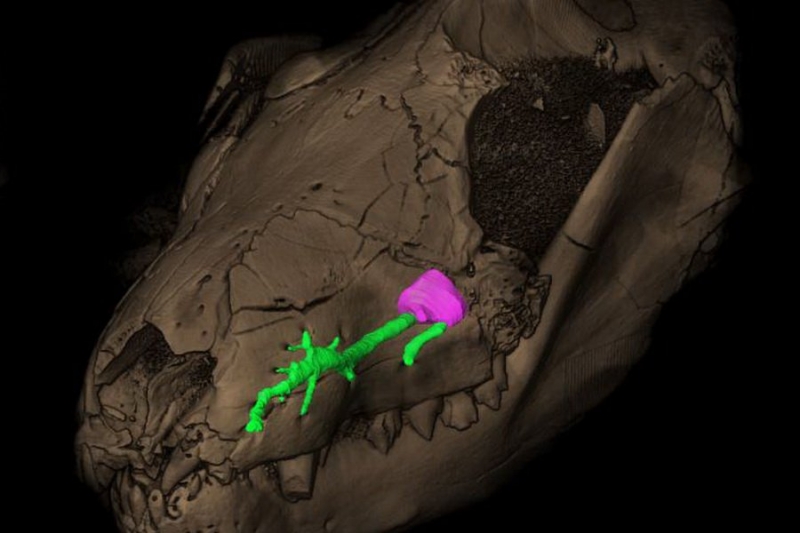 Tyrannosaurus Rex was the most ferocious creature in the jungle, but growing on the face mustache helped the mammal-like reptiles to endure this terrible beast.

When scanning therapsid fossils found in the Karoo desert in South Africa, Dr Julien Benoit and his colleagues from the University of Witwatersrand found that these mammal-like reptiles were developed whiskers, which they used as a sensory tool even long before the dinosaurs in the Mesozoic era were the dominant land animals.

“A mustache is an amazing sensory tool is required for night life. Thanks mustache therapsida survived and eventually turned into mammals,” said Benoit.

Karoo desert, which rocks are formed 300-180 million years ago, an internationally known diversity of fossil finds, in particular, and reptiles therapsida, which are the ancestors of mammals. Therapsida roamed the Earth long before the dinosaurs and on all continents of the world, but in South Africa they found more.

Using computer tomography and three-dimensional digital modeling, researchers have discovered the nerve endings, stimulating the sensitivity of whiskers therapsid. It turned out that the maxillary canal, which houses the trigeminal nerve, therapsid shorter than that of reptiles. Due to the trigeminal nerve, the animal’s face had a sensitivity. Besides, he passed into the soft tissue of the lips and nose and conveyed the excitement of the moustache.

Trigeminal nerve can move freely together with the flexible movements of the muzzle. Dinosaurs this channel was longer and the nerve is passed through the entire length of the upper jaw, which remained motionless,” said Benoit.

The study found that mammals with movable face evolved about 240 million years ago with the emergence of a group of therapsid called prostredny that are direct ancestors of mammals. In this group of animals has developed a large cerebellum and was lost the parietal eye, an organ in the parietal part of the skull, which senses the intensity of light and is responsible for thermoregulation and diurnal rhythms such as sleep. It is these two functions in mammals are controlled by the same gene MSX2, which is also responsible for the development of mammary glands and growth of body hair.

“It’s a gene that makes us mammals,” said Benoit.

For 240 million years, the MSX2 gene has undergone significant changes and has caused the development of such characteristic features of mammals, such as hair and whiskers, increased the cerebellum, the complete ossification of the skull, and, most important, and mammary glands.

“Our study showed that before the appearance of mammals, therapsid had all their signs,” said Benoit. – Now it becomes clear why mammals survived the reign of the dinosaurs and further evolutionary development.