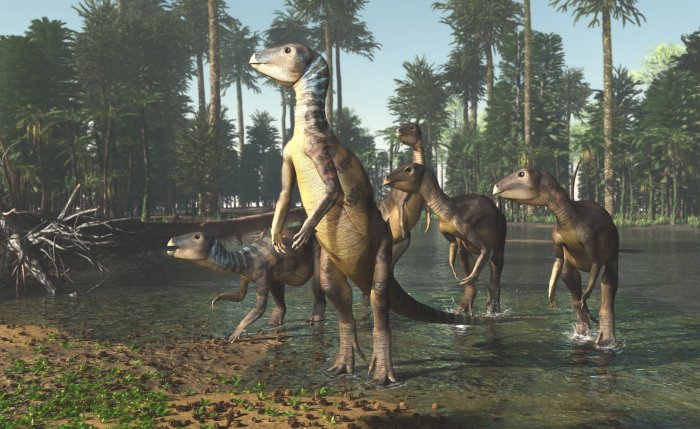 In Australia, scientists have found opalized fossils belonging to a dinosaur previously unknown species. It was named Weewarrasaurus pobeni – in honor of the opal field, where fossil remains were found, and the person who donated the fossils to the scientific community.

It is reported that the discovered individual lived about 100 million years ago – during the Cretaceous period (it began about 145 million years ago, and ended about 66 million years ago). This, as noted, is the first open species of dinosaurs in the Australian state of New South Wales in about the last 100 years.

The only found fragment of Weewarrasaurus pobeni is the lower jaw along with the teeth. On the basis of this fragment, scientists were able to talk about the ancient animal quite a lot: for example, the dinosaur was not large – no larger than a medium-sized dog. Based on the teeth and jaw shape, paleontologist Phil Bell (University of New England) determined that a new species to ornitopods is an infraorder of bird-thawed herbivorous dinosaurs.

According to the researchers, although in Australia, apparently, there were only one or two large ornithopods, the Muttaburrazavr (Muttaburrasaurus is a genus that includes only one known species) and another dinosaur, now under study by experts, this territory seems to be was home to more smaller species. This, as noted, is very different from the situation in America, where small herbivorous dinosaurs had to fight for food with such giants as Triceratops and Alamosaurus.

Thus, new species, including Weewarrasaurus pobeni, allow us to learn more about the features of the diversity of dinosaurs in different parts of the world. Now, as indicated, Bell is working with other researchers on the description of other opalized fossils.