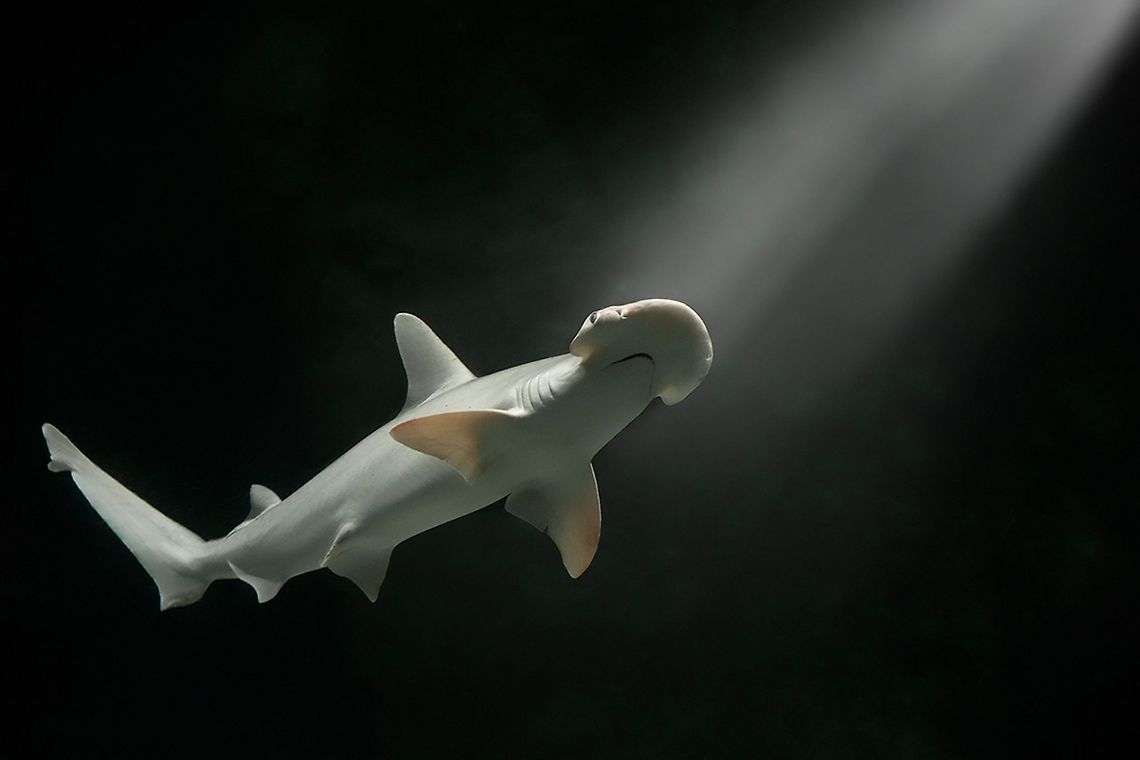 The very name of sharks has become synonymous with a cruel predator, but new observations by Californian biologists show that this is not always true. Small hammer-fish, widely distributed on the American coast of the Atlantic and the Pacific, were able to eat vegetarian food if necessary. The omnivorousness of these sharks scientists tell in an article published in the journal Proceedings of the Royal Society B.

Some strictly carnivorous animals are quite capable of eating some plants that have turned up under their arm, but are unable to digest them because of a too simple, short intestine, adapted only for digesting animal-rich animal food. True omnivores should be able to absorb and vegetable fibers, but no one expected this from sharks, so the discovery of Samantha Leigh and her colleagues from the University of California at Irvine was a sensation.

Small-headed hammerheads (Sphyrna tiburo) reach a length of just over a meter and weight up to 10 kilograms, feeding on shellfish and fish. Back in 2007, scientists for the first time noticed a suspicious habit of chewing bottom algae. In some cases, the contents of the stomachs of these fish consisted of plants by more than 60 percent. Since then, it was believed that sharks only absorb the plant mass without getting nutrients from it: for example, by accidentally swallowing during active hunting of squid hiding among the thickets.

However, Samantha Lee and her co-authors decided to test this in experiments. To begin with, they have grown enough quantities of seaweed, which are fed with soda containing low-carbon radioactive 13. These plants accounted for up to 90 percent of food, which for five weeks kept five caught in the Florida Bay sharks. Only 10 percent of the fish’s diet accounted for mollusks. The authors analyzed the composition of their secretions, and then they put the sharks to sleep and examined their gastrointestinal tract.

This work has shown that hammer-fish are really capable of absorbing nutrients from plant foods and possess the necessary cellular and biochemical mechanisms. Carbon-13 was found in their blood and liver tissues, showing that they successfully digested plant fibers. According to scientists, the fish managed to extract up to half of the substances contained in algae. Biochemical analysis showed that they also have the enzymes necessary to be truly omnivorous sharks.

By the way, the find points not only to the new dietary abilities of hammer-fishes, but also makes for a new look at food and ecological interactions between living organisms inhabiting the warm coastal waters of the Pacific and the Atlantic. Flowering algae, which these sharks actively feed, form the basis of local ecosystems, and hammer-fish, as it turned out, can make a significant contribution to their dynamics, eating not only herbivorous organisms, but also algae themselves.