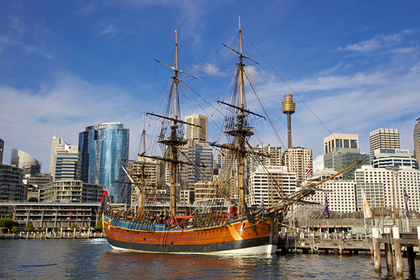 Archaeologists of the Australian National Maritime Museum have determined the exact, in their opinion, the place of flooding of the ship HMS Endeavor, which in the XVIII century was commanded by British explorer Capt. James Cook. This site is located next to the island of Goth in Narragansett Bay (Rhode Island, USA). This is reported by The Age.

According to experts, the exact identification of wreckage of the ship will be possible only after underwater excavation, which is scheduled for next year. Archaeologists do not yet know what exactly is left of the HMS Endeavor, made from oak and pine wood and lying on the bottom for more than 200 years. It is expected that on September 21, the Australian Museum staff will present a detailed three-dimensional image of the bottom relief in the alleged site of the ship’s flooding.

The state of Rhode Island government said that Australian officials will have to negotiate to obtain permission to transport any wreckage of HMS Endeavor to Australia. Museum workers hope that they will be able to expose some of the artifacts found at the site of excavations in April 2020, the 250th anniversary of the arrival of James Cook in Australia.

HMS Endeavor was built in 1764. In 1768, a vessel under the command of James Cook left Plymouth (England) and set off for his first round-the-world voyage. In April 1770, Cook arrived on the eastern coast of Australia. It is believed that after traveling the ship was converted into a military ship and sunk in 1778 during the war for US independence.