Discovered the main mystery of the universe 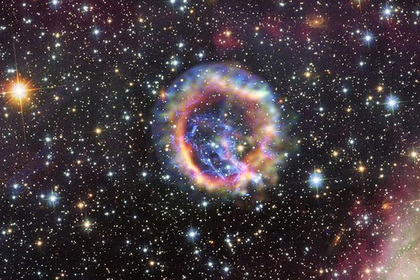 American astronomers specified the Hubble constant, which turned out to be 74.03 kilometers per second per megaparsec. This value characterizing the rate of expansion of the Universe turned out to be higher than previous estimates. Such a result may indicate the existence of physical laws outside the current cosmological models. Preprint article published in the repository arXiv.

To calculate the Hubble constant (H), scientists used the method of standard candles, which consists in measuring the distance to objects based on their apparent brightness and known luminosity. Such objects are cepheids – pulsating variable stars, whose luminosity is strictly dependent on the period of change in brightness. Scientists have calculated the luminosity of 70 Cepheids in the Large Magellanic Cloud (BMO).

The obtained data allowed us to calibrate the scale of extragalactic distances. Astronomers specified distances to type Ia supernovae — another type of standard candlestick (they allow us to determine the distance to more distant galaxies) —and determined H with less systematic uncertainty (2-15 percent). At the same time, the researchers combined estimates of the distances to Cepheids in the LMC with the results of measuring trigonometric parallaxes to objects in the Milky Way, as well as distances to variable double stars and microwave sources (masers) in the galaxy M 106.

The difference between the new H value in the local Universe (in the vicinity of the Milky Way) and Planck’s constant in the conventional Lambda CDM (ΛCDM) cosmological model was 6.6 kilometers per second per megaparsec or 4.4 sigma (sigma denotes the standard deviation).

Hubble constant connects the distance to the object with the speed of its removal. According to the data obtained by the Planck Space Observatory in measuring cosmic microwave background (this method allows us to follow the evolution of the Universe after the Big Bang), the value of the constant was 67.31 kilometers per second per megaparsec. The inconsistency of the Hubble constant values ​​obtained by various methods indicates an incomplete correspondence of the ΛCDM with the observed data.

At present, the cosmological model ΛCDM is the most accurate description of the evolution and large-scale structure of the Universe. It describes mathematically the evolution of a flat Universe, which arose after the Big Bang and has a non-zero positive cosmological constant (lambda member). The model explains the observed relic radiation structure (cosmic microwave background), the distribution of galaxies in the Universe, the abundance of hydrogen and other light atoms, as well as the rate of expansion of the vacuum.