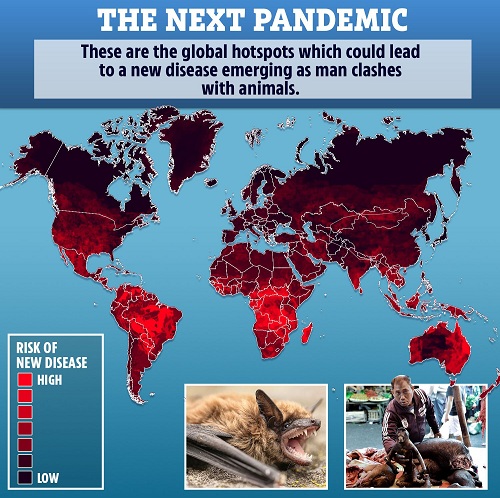 Humanity is at war with nature around the world, which could trigger an outbreak of Disease X, which could be worse than the Black Death pandemic.

Scientists have predicted that every five years we could face a public health emergency or pandemic, probably caused by “zoonotic” diseases – when infections are transmitted from animals to humans.

The World Health Organization (WHO) announced this week that it believes Covid is likely one of these types of infections, as it is believed to have passed from animals like bats to humans.

It has been warned that more deadly diseases like this are on the way – with warnings, the next pandemic could be on the scale of the Black Death, with an estimated 75 million deaths.

Experts say there are many other mysterious diseases lurking on the fringes of human society around the world that can spread to humans.

And in the last few decades alone, dozens of examples of disease transmission from animals to humans have been recorded.

Nightmare Scenario is one of these new diseases, or a variation on an older disease that is both highly contagious and deadly – it allows millions of people to spread quickly and kill before the world can take action.

The threat of unknown viruses that can transmit to humans and potentially cause widespread epidemics is known by WHO as disease X.

Of the 1.67 million unknown viruses on the planet, up to 827,000 of them can infect humans from animals.

Southeast Asia, South and Central Africa, areas around the Amazon and eastern Australia were identified as the areas with the highest risk for new diseases.

And as the human population grows and spreads more to animal habitats, the risk of disease transmission to humans increases.

Unbridled deforestation, uncontrolled agricultural development, intensive farming, mining and infrastructure development, and exploitation of wild species have created the “perfect storm” for the spread of disease from wildlife to humans.

This often occurs in areas where communities are most vulnerable to infectious diseases.

Scientists have widely warned that humanity could face a health emergency every five years if no further precautions are taken – the threat was highlighted at the December World Economic Forum briefing.

“Covid-19 is not the last health hazard. Instead, it is likely that humanity will face a pandemic or health emergency at least once every five years, ”the report said.

We may not be able to completely avoid this risk, but we can mitigate the consequences.

This pandemic is a sobering warning against the relentless exploitation of the natural world and the fact that zoonoses affect not only health but also the survival of humankind as a society.

“Covid-19 will not be the last and perhaps not the worst zoonotic pandemic.