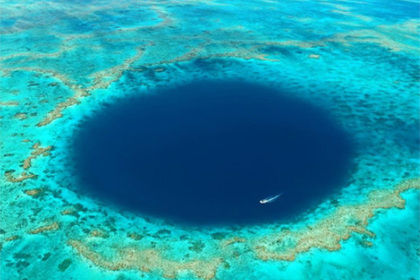 Divers first explored a huge blue hole, located 200 kilometers from the island of Deidrim near the north-eastern coast of Australia.

In a water filled karst funnel, divers found healthy colonies of coral polyps, although coral reefs are actively discolored around the Great Barrier Reef, due to the eviction of symbiotic algae.

Marine biologist Johnny Gaskell (Australia) posted a snapshot of the blue hole in Instagram. There he wrote that a blue hole had previously been discovered by geologists, but only recently was thoroughly investigated by scientists.

A blue hole is called a karst funnel filled with water and located below sea level. Its name was given to blue holes because of the contrast of deep dark blue water and lighter water around.