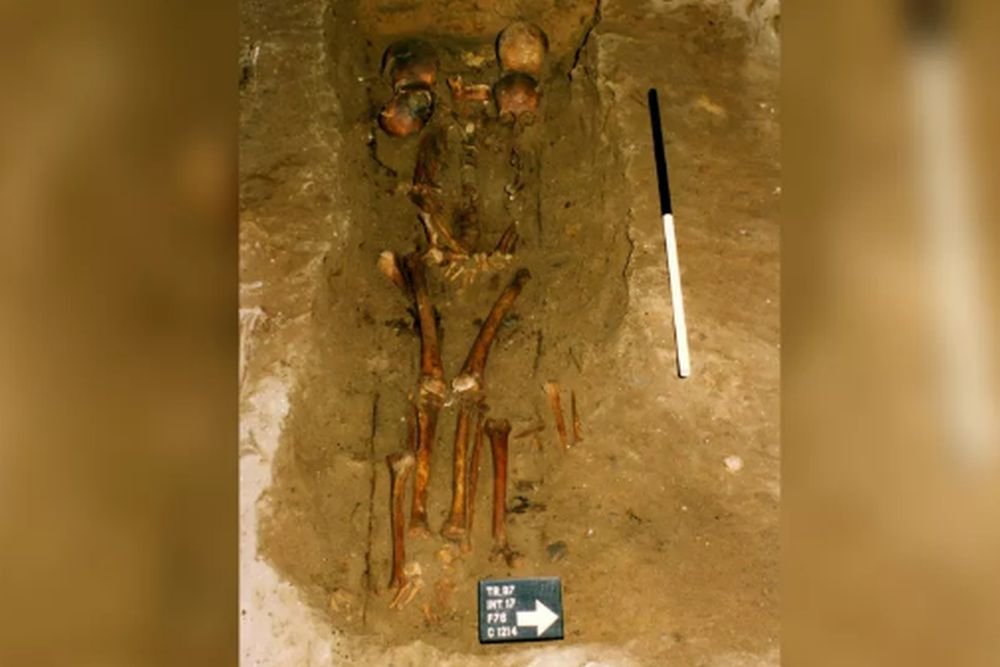 Experts at Bradford University (UK) analyzed DNA recovered from the remains of six skulls of a mysterious medieval grave, and found that the people buried in it were relatives and died in different centuries.

Live Science tells about the discovery. This is the so-called tomb of the “six-headed leader”, which was discovered back in 1997 in the Scottish highlands of Easter Ross.

This strange tomb, which was initially believed to contain the remains of one person surrounded by five skulls, was excavated near the altar of the former parish church in Portmakhomack, a fishing village.

The burial is reluctant to reveal its secrets. So, last year, scientists managed to establish that, in fact, the full remains of not one, but two people rested in the grave. Recent research indicates that these men were buried between the late 13th and early 15th centuries.

DNA analysis revealed that they were cousins ​​or uncle and nephew. The skulls found in the grave also, as the study showed, belonged to their relatives. So, three skulls belonged to the grandfather, father and mother of one of the men. The fourth skull belonged to the son of a second man.

Thus, it was established that the mysterious burial is a family one. However, DNA testing only thickened the mystery. The fact is that radiocarbon analysis gave slightly different data. According to him, one of the skulls dates from the VIII-X centuries AD. Therefore, scientists have yet to work on dating based on DNA analysis data. It was also found that the oldest skull was recovered from another grave, which was located in a nearby monastery cemetery.

With this information, archaeologists now speculate that the oldest skull belonged to a Pictish priest, an ancient indigenous people. It may have been dug out of the grave to be kept as a valuable family heirloom.

“It was unheard of in Scotland at the time that disembodied skulls were placed in a grave,” says archaeologist Cecily Spall of the FAS Heritage project, field leader. but this is something completely different. In the medieval period, it was extremely unusual to dig up the grave of your parents and grandparents, remove body parts from there and place them in modern burials. ”

Scientists have also established that the person whose remains were completely preserved and who was buried first was probably killed with a sword blow. Moreover, with this blow, part of his face was severed. In this regard, archaeologists say that the parish church of Tarbat in Portmakhomak, where the remains were located, was the scene of a fierce battle between rival clans in the 15th century.

According to osteologist Shirley Curtis-Summers of the University of Bradford, the deceased was the tallest of all people buried in the grave. His height was 175 centimeters – it was a very tall growth for that period. And the fact that he was buried near the altar of the parish church indicates his high status. He was probably a very important person in his clan.

However, the new study actually refutes the hypothesis that the remains date from the 1480s, when the clans fought. The carried out radiocarbon analysis showed that these people were buried several generations before the Battle of Tarbat.

Now archaeologists believe that the “six-headed leader” could have been a local leader who suddenly died at the hands of some assassin. As for the rest of the skulls, in the opinion of scientists, this could be a symbol – an attempt to strengthen in the consciousness of society a continuous family connection and demonstrate their power and uniqueness.

“Their leader was killed, and the family needed to legitimize the status of those who followed him,” Curtis-Summers said. “The strange style of burial indicates that the family was important to the locals.”