Do the dolphins cry their dead relatives? 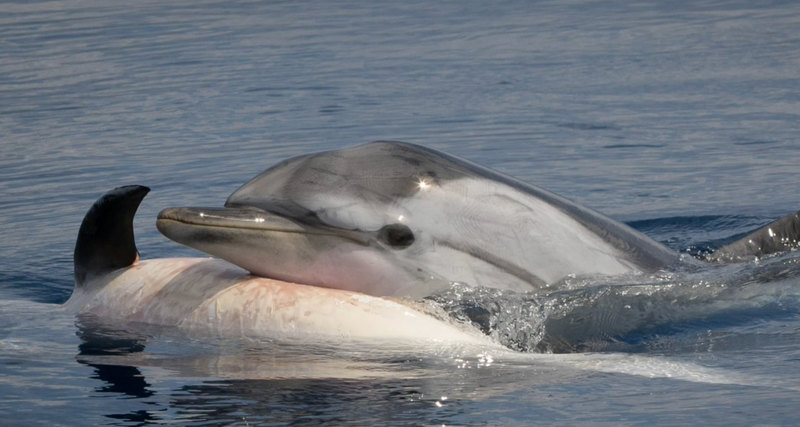 Cetaceans are sometimes observed in situations that a person experiences as very painful (death of a calf or close friend), and the behavior of dolphins and whales sometimes resembles a human grief that it is easy to succumb to temptation and conclude that dolphins experience grief. However, this remains to be checked.

On Youtube there are several dozen videos with dolphins that behave very similar not to people who have lost a close friend or family member: females and males, who do not let the dead cubs out of sight, adults who do not depart from the bodies of dead comrades for a long time. People tend to interpret this behavior as an expression of grief, but it still needs to be proved. Scientists are almost sure that chimpanzees, baboons, some other primates and elephants are capable of grieving, but there is no clarity about dolphins.

Marine biologist Giovanni Bearzi of the Italian Center for the Study of Biology and Restoration of the Dolphin Population collected and studied 78 published in the scientific literature descriptions of the behavior of dolphins and other cetaceans near their dead from 1970 to 2016.

First, scientists have established that most often this behavior is observed in humpbacked dolphins and bottlenose dolphins; but the humpback whale was caught at such a thing only once.

Scientists also found a correlation between the size and complexity of the cetacean’s brain and the number of such observations. Highly social dolphins living in groups with a complex hierarchy usually have a more complex arranged brain than single whales. Perhaps, however, that the statistics reflect only how often one or another species falls into the field of view of researchers, note the authors of the work; However, if the correlation does exist, it serves as a proof of the hypothesis that such a complex emotion as grief is peculiar to beings with a large and complex brain and complex communities.

But how can one prove that reluctance to let go of the dead is a manifestation of grief? Jane Goodall, to confirm that her beloved chimpanzees are longing for her dead, just watched them very much .; The scientific community was finally convinced that chimpanzees survive the death of their loved ones after Goodall described the behavior of the inconsolable chimpanzee son, who after his mother’s death refused to eat and died a month later. Other scientists measured the level of stress hormones in the blood in animals whose behavior resembled the experience of pain from loss.

Data on the whales is still too small, according to the authors of the new work; say whether they suffer when their loved ones die, is difficult. Now scientists are going to devote themselves to observations – to record on the hydrophones the sounds that cetaceans publish at the sight of dead relatives, to launch drones that will fly over the whales at the time of jet ejection through the breathing hole to do the analysis.