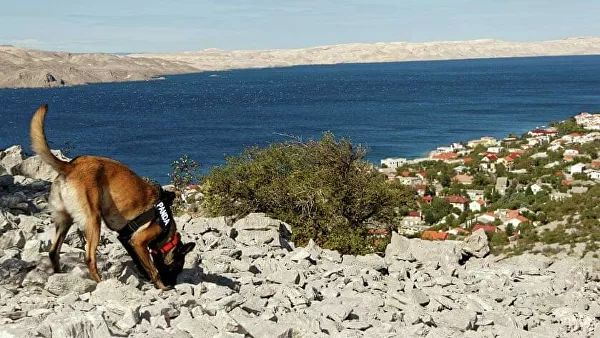 Archaeologists in Croatia attracted dogs to search for the tombs of the Iron Age, three thousand years old. A new method for detecting human burials with the help of specially trained dogs is described in the journal Journal of Archaeological Method and Theory.

The ability of dogs to search for human remains by smell is widely used in forensics. Croatian archaeologists have decided to apply this quality of our four-legged friends to search for ancient graves.

During excavations near the ancient settlement of Drviszyca, dating back to the eighth century BC, archaeologists discovered three ancient burials on the Adriatic Sea.

The idea to use dogs for further research on the Iron Age necropolis came to the mind of a Croatian researcher from the University of Zadar, Vedrana Glavaš. She contacted Andrea Pintar, a trainer who trains dogs to search for human remains for criminal investigations, and suggested an experiment.

In 2015, Andrea Pintar brought four Belgian and German shepherds to the site. First they ran a test to find out if they could find the excavated graves. Dogs unmistakably found all three places, although bones and artifacts were removed from the graves a year ago, and excavated graves all this time were exposed to wind, sun and rain.

Thus, the researchers were convinced that it was enough for dogs to detect objects of those volatile organic compounds that are formed during the decomposition of human remains and penetrate into the pores of the rocks surrounding the grave.

“Dog’s noses clearly make no mistakes,” cites the assistant professor of archeology at Zadar University and the lead author of Vedran’s research, The Guardian.

Later, the dogs helped archaeologists discover six more graves. In each case, before starting to dig, the researchers used at least two dogs to confirm the site of the alleged burial.

Dogs searched for objects with very high accuracy, despite the fact that the tombs were rounded structures with stone walls, in the center of which was a small stone sarcophagus with small fragments of the skeleton, such as the fingers or toes of several people. According to archaeologists, these are the remains of representatives of several generations of the same family. In the sarcophagi, along with the bones, there were buckles and other artifacts.

Scientists believe that using dogs can be a good way to identify archaeological sites, as it is less destructive than excavation. It can be combined with ground penetrating radar (GPR), electrical resistance measurement, or remote sensing.