Dozens of “climate bombs” threatening the Earth found in the USA 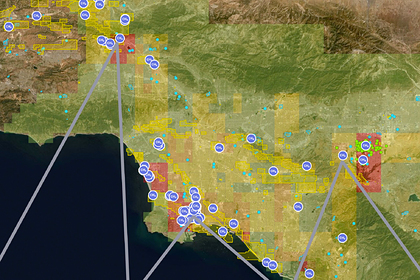 NASA scientists have discovered hundreds of anthropogenic sources of concentrated methane in California, with ten percent of them being super sources that emit the most greenhouse gas. This was reported in a press release on Phys.org.

The search for sources was carried out using an aircraft equipped with an infrared spectrometer, which is capable of recording methane emissions. Researchers studied 300 thousand objects, including oil and gas fields, large dairies and landfills. A total of 550 sources were identified, with super sources responsible for a third of California’s total methane emissions.

Of the 270 surveyed landfills, only 30 emit large methane plumes, but their contribution to the total volume of methane is 40 percent of the total among all other point sources.

Like carbon dioxide, methane traps heat in the atmosphere, but does it more efficiently and for a shorter period of time. The greatest concern is the accumulation of gas in permafrost, which will melt into the atmosphere huge volumes of greenhouse gases. Researchers often view permafrost as a climate time bomb.