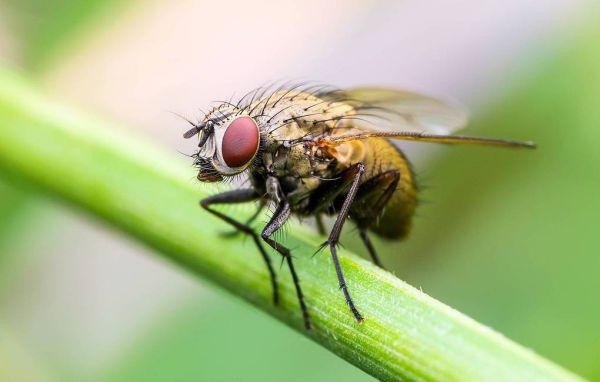 Studying the properties of receptors in the eyes of fruit flies has shown that these insects see orange-colored light waves best of all, and also perceive ultraviolet radiation unusually well. An article with the results of the research was published by the scientific journal Scientific Reports.

“Carotenoid filters in the eyes of flies absorb light waves in the violet and blue parts of the spectrum and shift their peak sensitivity to the orange part of the spectrum. This feature of their eyes has another consequence – it increases the sensitivity of their ultraviolet photoreceptors. This makes the flies better perceive the colors of the surrounding world. “- said Camilla Sharkey, researcher at the University of Minnesota (USA) and one of the authors of the study.

In the eyes of humans and the organs of vision of other mammals, there are two types of light-sensitive cells – cones and rods. The former are responsible for recognizing colors in high light conditions, and the sticks provide the ability to see silhouettes of objects in dim light – for example, stars or the moon.

The number and structure of different types of cones and their function may vary markedly. For example, humans have three types of cones in their eyes, and birds and reptiles have four, one of which allows them to see ultraviolet radiation.

Many invertebrates have even more exotic organs of vision. They help to “save” the computing resources of the brain and recognize only those forms of light that are important for survival. The eyes of mantis shrimp are arranged in a similar way: they have 12 different photoreceptors, each of which distinguishes a specific color.

The world in the eyes of a fly

Sharkey and her colleagues discovered several unusual features of invertebrate photoreceptors at once by studying the eyes of the most studied insect on Earth, the fruit flies, fruit flies (Drosophila melanogaster).

Biologists have known for decades that these insects have full color vision. However, the exact mechanism of the Drosophila photoreceptors, as well as the differences in how they perceive the world in comparison with other living things, remained a mystery to scientists.

American molecular biologists and neurophysiologists have tried to get answers to these questions. To do this, they modified the flies’ genome so that each of the eight types of photoreceptors in the eyes of insects could be selectively disabled.

The scientists left only one type of receptor on and connected it to electrodes. In this way, they observed how nerve cells responded to irradiation with light at different wavelengths. Thanks to this, Sharkey and her colleagues were able to monitor how the entire eye of the fly as a whole worked, and not just its individual components, the work of which had been well studied in the past.

These experiments have shown that fruit flies are best at seeing colors that are far from being indicated by the decoding of their genes. For example, the Rh6 receptor, which is supposedly responsible for recognizing green hues, actually perceives orange colors best, and the Rh1 receptor was responsible for ultraviolet vision, not blue and violet tones.

Many such shifts in the nature of their work, as the researchers found, were associated with the fact that the eyes of fruit flies are covered by a kind of “light filter” – a structure of yellow color. It is made up of carotenoids, molecules that are similar in structure to vitamin A.

The same filter, as scientists found, blurs the sight of flies somewhat, but makes them more sensitive to different colors. This probably plays an important role in their life.

The researchers note that it is important to take into account this feature of the fly’s vision when conducting further experiments in which experimenters study how Drosophila use their eyes, as well as when transferring their results to studies on vertebrates.