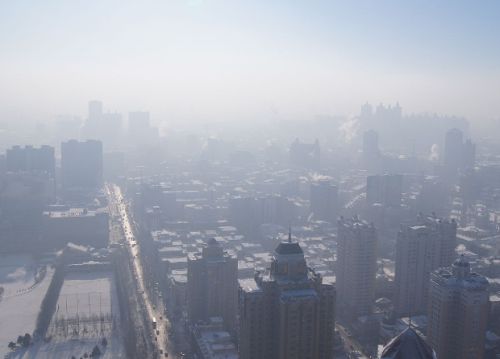 Scientists have linked 1.5-2.2 million annual premature deaths from 2000 to 2016 in China with prolonged inhalation of fine dust particles – PM2.5. In just 16 years, this pollutant has claimed the lives of about 30.8 million people. Global direct air pollution monitoring data has only become available since 2015, but scientists have been able to model PM2.5 in the air in previous years from satellite imagery using machine learning. The article was published in the journal Proceedings of the National Academy of Sciences.

PM2.5 is a dust particle size of less than 2.5 microns. It is one of the leading air pollution factors affecting human health: in 2015 alone, at least 4.2 million people died from PM2.5 exposure worldwide, 1.1 million of whom were in China. Comprehensive monitoring data for atmospheric pollution (and not just its surface layer) in this country became available only in 2013, so the exact number of deaths from PM2.5 in previous years remains unknown.

Scientists led by Fengchao Liang of the Chinese Academy of Medical Sciences investigated premature deaths in China in 2000-2016, caused by inhalation of dust particles for many years. They viewed the sum of deaths from lung cancer, coronary heart disease, and stroke as the diseases most closely associated with inhaled particulate matter. During this time, the Chinese environmental authorities – China National Environmental Monitoring Center, Hong Kong Environmental Protection Department and Taiwan Environmental Protection Agency – monitored PM2.5 in the surface air, but not everywhere.

The authors of the study used the data from the results of this monitoring, as well as the values ​​of the AOD (aerosol optical depth) parameter, which was calculated from satellite images: it predicts the level of PM2.5 in the air. Scientists turned to a machine learning algorithm used in similar cases, which assumes a stable relationship between the amount of dust in the atmosphere (it can be determined by AOD on satellite images) and its amount in the surface layer. Thus, scientists were able to reconstruct the dust content in the air over all provinces of China in previous years and compare them with data on the death rate of the population. 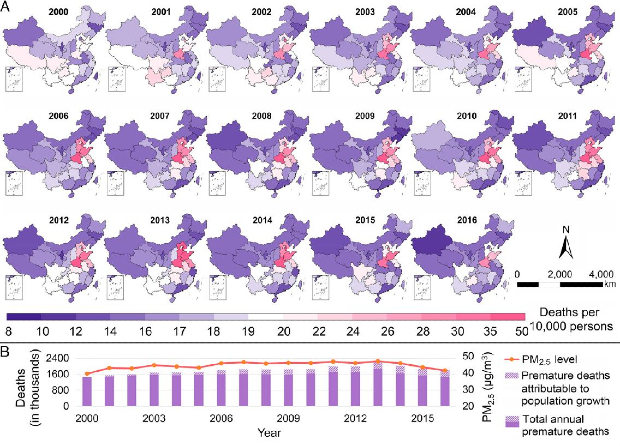 Premature deaths associated with long-term exposure to PM2.5 from 2000 to 2016. A is the annual number of such deaths per 10 thousand people in each province of China; B – average annual PM2.5 concentrations and corresponding mortality rates in China.

It turned out that from 2000 to 2016, due to prolonged exposure to PM2.5, 30.8 million people died. Every year, from 1.5 to 2.2 million people became victims of air pollution, and from 2000 to 2013, mortality from this indicator increased by 29 percent, and from 2013 to 2016 it decreased to almost the 2000 level. The study authors noted that their chosen and refined method for quantifying PM2.5 in air in the absence of direct monitoring would help investigate the relationship between air pollution and human health in other developing countries.

Dust contributes not only to an increase in premature mortality, but also to a range of health problems in people of different ages: for example, a recent study found that exposure of mothers to PM2.5 air pollution during the first trimester of pregnancy was associated with a decrease in weight and body mass index their children are four years old.