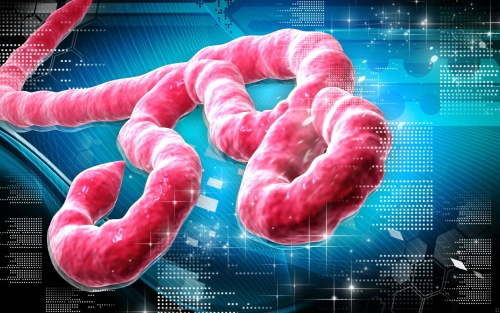 The sharp splash in epidemic of fever Ebola which began in 2013 and covered the countries of the Western Africa didn’t end yet, but already fairly puzzled specialists. Before the disease didn’t affect more than several hundred people, but this time them there were tens of thousands. The virus reached large megalopolises and, judging by the last to data, promptly mutated.

The teams of biologists from Harvard working under the direction of Pardis Sabeti and of Jeremy Luban group of the Massachusetts university acted as authors of the first publication. They analysed genomes of the Ebola viruses allocated from 1489 African patients during the different periods of epidemic of 2013-2016. It was found out that already by March, 2014 when the problem began to find this scope (and about three months later after registration of the first case of a disease), it was possible to find two separate strains.

One of them had a replacement of one amino acid in a glycoprotein of a virus cover – in that site which is required for its interaction with a cage owner membrane. Already soon the mutant completely forced out the competing strain. Authors didn’t get access to work with a dangerous virus therefore they couldn’t make direct experiments to find out whether the mutant strain is more virulent. However they did indirect experiences, having designed artificial analogs of the real viruses bearing the corresponding genes of both strains. The mutant form of such model infected culture of cages much more effectively initial.

Approximately the European researchers, authors of the second article also came to the same conclusions, – Jonathan Ball from the Nottingham university, Etienne Simon-Loriere from Institute of Pasteur and their colleague. They used own set of the samples of blood received at 1610 patients with fever of people also having found a mutation in the corresponding glycoprotein. Irrespective of scientists from the USA, they also made experiments with model viruses, however the team used other cellular cultures.

In particular, they found out that, having mutated, the virus became worse to infect cells of the previous key owner, a bat of Hypsignathus monstrosus, but it is better human. Authors found also some other mutations which can increase virulence of a new strain in relation to the person.

At the same time and those, and other scientists with extreme care say that mutations and emergence of a new strain became the reason of unusual outbreak of a disease in Africa in 2013-2016. Perhaps, the key role was played by the first fixed exit of rare and dangerous fever large megalopolises where spread of a virus happens much more promptly, and to limit it much more difficult.