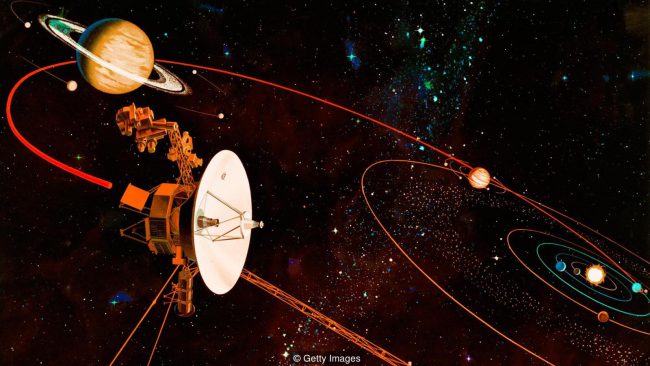 For those who live in the universe of “Star trek”, April 4, 2063 will be a great day. On this day, a brilliant rocket engineer Zefram Cochrane for the first time successfully test your warp drive. Technology will revolutionize the field of space travel, space ships can travel faster than the speed of light and will lead us boldly go where nobody has been before.

For all other warp engines, worm holes and travel faster than the speed of light will remain purely speculative concepts. They can be possible — the idea of deformation (warp) of space and traveling through short passages in the fabric of space-time many years considered scientific but very few physicists are willing to put serious money against the statement of Einstein, that nothing can move faster than the speed of light.

What about those who want to get outside of our Solar system and see what is there?

The only spacecraft that has gone further than planets, moons and asteroids of our Solar system, was “Voyager-1”. At the time of this writing, this plucky probe was 20 083 476 000 miles from Earth, moving at the speed of 17 kilometers per second. And it seems to be cool, but Voyager 1 was launched in 1977 and equipped with scientific tools, cameras and sensors and early 70’s. With them he flies for nearly 40 years.

Before people try to send another probe to interstellar space, the engineers hope to find a way to get there faster and, ideally, in your life.

There are several options. Some like the solar sail is a giant mirrored sheets, driven by the force of photons of the Sun. Others — including Stephen Hawking — like flying these sails with a tightly focused beam of photons that will generate the lasers on the Ground or on satellites in orbit.

NASA engineer Bruce Wegmann is studying the possibility of flying to the stars with the use of the propulsion system, which resembles a broken umbrella or sinewy Medusa. It is based on the idea of the electric sail space probe placed in the center of the fan from the metal wires.

Instead of a start at the expense of the photons, electrophorus uses the energy of the solar wind. This stream of charged particles continuously emitted by the Sun at a speed close to 400 km/s. Preliminary studies indicate that the spacecraft, riding the wind, could move three times faster the probe, equipped with a solar sail.

“You have a long thin bare wire, which are positively charged and extend from the slowly rotating spacecraft,” says Wegmann, working in the Department of advanced concepts, NASA Marshall space center in Alabama. “Positively charged wire will repel positively charged ions of the solar wind, pushing the spacecraft — like the magnets that we played in school, magnets of the same polarity repel each other.”

“We could repeat the mission of Voyager, but for 10-12 years,” he says. — We could get to Pluto in 5-6 years, two times faster than the Dawn mission, and to Jupiter for two years.”

But in practice it may not be so easy.

Professor of astrophysics at the University of Michigan Thomas Sarbacher says that the idea Wegmann “lot of problems”.

“Most of the energy of the Sun comes in the form of light,” he says. — Her full force in the solar sail is roughly equivalent to the gravitational force chocolate bar on the football field — the solar wind is a thousand times less.”

Therefore, if a solar sail can be several hundred meters wide, space the umbrella of NASA needs to be 40 kilometers in diameter — the size of a city — and the wires attached to the space unit, have to run on a conventional rocket like the new SLS on NASA.

Recently Sabahan managed large American scientific research that has shown that small satellites, known as Cubesat, perfectly capable of planetary missions and will be much cheaper than traditional spacecraft. But it is not certain that the flight of charged wires would be the best way to get them to move. “The material side of all this is appalling,” says Sarbacher. — We make wire more than a hundred years and they still break”.

“Think about the wires: they are heavy because made of metal,” he says. They should be higher quality, otherwise when you miss them the electricity they burn. They will break and in that case, if for him to hit the micrometeoroid”.

Instead of using electrophorus, Sarbacher more like the idea to overclock the future probes using solar sails or nuclear movement — or both. Not that the electric umbrella is impossible to do. But certainly not easy.

Team Wegmann currently engaged in the foundations of engineering in his project and hopes to conduct the first tests using wires attached to high altitude balloons.

“We will try to prove the possibility of the technology,” says Wegmann planning to hold its first demonstration mission in early 2020’s. “We are also exploring the physical side of the question, to see how much propulsion power will be able to produce the solar wind. All with something began. I like this idea. If we can prove the physics will remain the case for engineers”.

If the technology proves successful, the spacecraft on electroporate will be able to overtake Voyager. Or we could just wait until Cochrane will invent warp drive, and then both the previous version will remain far behind…