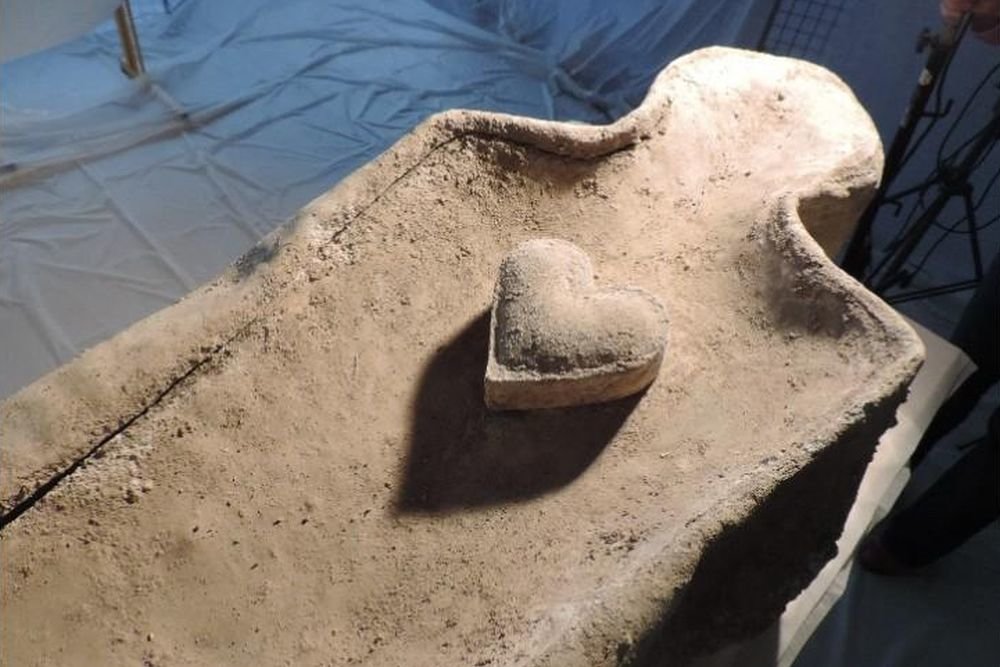 Researchers from the National Institute for Preventive Archaeological Research of France (Inrap), during excavations in the Place Saint-Germain in the city of Fleurs, discovered two lead coffins. One of them contained a heart-shaped urn called a “cardiotaph”.

A summary of the research conducted by an interdisciplinary team of experts is published on the Inrap website. The unique archaeological find had to be examined in an anatomical laboratory. This was the only way to reveal the secret of the burial urn, inside which was a carefully embalmed human heart.

It is reported that the artifact was found by archaeologists in the fall of 2014. There was an ancient parish church in the Place Saint-Germain. It contained two anthropomorphic lead sarcophagi dating from the 17th-18th centuries. On one of them rested a lead urn made in the shape of a heart, the so-called “cardiotaph”.

In 2015, both coffins became the subject of laboratory research. Inside them were found skeletons of adults, whose skulls were opened. This suggests that the bodies were subjected to an embalming ritual. And this, in turn, indicates that the buried were people of a very high social status. Scientists immediately assumed that these were representatives of the line of the Counts of Fleursky.

The burial urn has not been studied until now. By the way, scientists note that it is in perfect condition. The fact is that cardiotaphs are often found in parish and monastery churches. They were intended to store the heart of a deceased person after internal organs were removed from his body during the embalming process. This was a common funerary practice among European elites, and was most widespread between the 16th and 18th centuries.

The found cardiotaph was opened with a small electric circular saw. A filler was found in it, made of some kind of granular loose material of brown color, which has a pleasant aroma.

Inside this filler, the researchers found a mummified heart. A DNA sample was taken from it, which will now be compared with DNA samples from two people exhumed in 2015. This will help determine if the heart belongs to a person buried in a lead coffin, or does it belong to some other member of the count’s family?

The heart was transferred to an anatomical laboratory for dissection. It was established that it was not wrapped with a tourniquet or linen, like some hearts previously discovered during excavations at the Jacobin monastery in Rennes.

Scientists also say that the heart, like the urn, is very well preserved. This proves that the embalming of organs during this time period was very effective. Further research will help determine what ingredients were used to mummify and what exactly served as the filler that has ensured the amazing preservation of organic tissue for centuries.

Probably a mixture of different plants was used for this, as indicated, for example, by the strong smell of peppermint and the presence of a granular substance, which is probably pollen grains.

DNA analysis will complete the process of identifying the identity of the buried people. Scientists suggest that these could not be counts, but barons – representatives of a noble family that settled here in the 15th century. In any case, it is clear that these were noble people with high status.