Emerald wreaths destroy forests of the USA and Canada 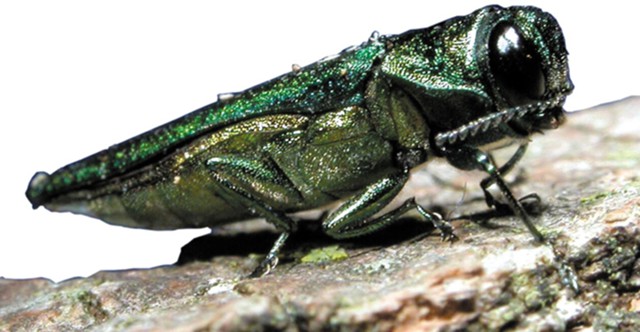 Emerald Grammar (“beetle-saboteurs” that destroy forests in the US and Europe) originally inhabited a fairly small region at the junction of the borders of North Korea, China, Russia and Japan, Russian scientists note in an article in the journal Biological Invasions.

“It would seem that it could be simpler, but point-like areas of insects are a rarity.” “Collect all the finds and put it on the map-that’s all.” People prefer not to define an area, but rather to rewrite from other articles, probably because it’s very laborious work – take into account every point, write out all the geographical coordinates, “- noted Marina Benkovskaya, an employee of the Institute of Ecology and Evolution of the Russian Academy of Sciences, RIA Novosti reported.

The so-called emerald weeds (Agrilus planipennis) are widespread in the east of Russia and China, where these insects affect old and sick ash trees without causing serious problems for healthy trees and other vegetation. Unexplained, emerald giants penetrated North America in 2002. Since then, beetles are rapidly spreading through ash forests in Canada and the US, literally mowing vegetation.

Five of the six most common types of poplars in North America were caught by beetles in the new version of the Red Book. Another species of poplar has fallen into the category of species whose survival is threatened.

The poplar population in North America is about 9 billion trees, most of which can disappear in the next ten years due to the further spread of “saboteur beetles”. All this will lead to huge changes in ecosystems and will deprive the US and Canada of the source of wood for furniture, baseball bats, sticks and tennis rackets.

The homeland of “saboteur-beetles” remained a mystery to scientists, before anyone tried to determine the exact boundaries of the habitat of these pests, as biologists and environmentalists believed that beetles live almost throughout North-East and East Asia.

Russian scientists have decided to check whether this description is correct and complete, comparing it with accurately documented data on the dwelling of the emerald gnatko in Asia. The scientists studied information from various sources, examined specimens stored in museum collections, collected data from articles and books published in different languages, including rare Japanese and Chinese works, and built the first accurate map of the natural area of ​​the pest.

It turned out that the area of ​​the emerald mass in Asia is much smaller than it is commonly believed. The insect is distributed in the Far East, in eight provinces of China, on the Korean peninsula and in Japan. The references to the distribution of this beetle in Mongolia, Taiwan, as well as in Inner Mongolia and the Chinese province of Sichuan are not confirmed.

The definition of the habitat of “saboteur-beetles” is important for several reasons. First, biologists can begin to search for natural enemies of the zlatok, which can help contain the spread of these pests in America and Western Europe. Secondly, this discovery allows us to take measures to contain the spread of beetles and prevent its penetration into other corners of the Earth, yet not familiar with these pests.

“We believe that our research should become a model.” The example of an ashamed emerald narrow-bodied gnat shows that the generally accepted notions of pest habitats need to be checked by collecting information about specific finds, “concluded Benkovskaya.