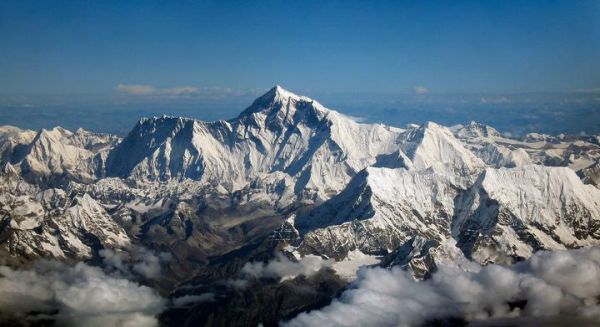 Scientists have found in the snow samples collected in the vicinity of the summit of Everest, several microparticles of plastic, the origin of which remains a mystery to environmentalists. This was announced on Friday by the press service of the University of Plymouth with reference to an article in One Earth magazine.

“In recent years, we have found microplastic particles in virtually all corners of the planet, from the Arctic and rivers to the bottom of the Mariana Trench and the deepest oceans of the Earth. Their discovery at the top of Everest once again indicates that we must actively protect the environment from such pollution, “- said Imogen Napper, an ecologist at the University of Plymouth (UK), whose words are quoted by the university’s press service.

Mount Everest (Chomolungma) is the highest mountain peak on Earth, which rises above sea level at 8848 m.Since the middle of the 19th century, hundreds of teams of climbers and travelers have tried to conquer it and reach the top, which was officially made only in 1953 by Tenzing Norgay and Edmund Hillary.

In total, over the past century and a half on the slopes of Chomolungma, over three hundred climbers have died trying to accomplish this feat. Considering the inaccessibility of the summit of Everest, ecologists have long considered the slopes of this mountain one of the cleanest corners of the Earth, untouched by the hand of man.

Complete pollution of the planet

Napper and her colleagues found out that this is no longer the case by studying samples of snow and river water collected by climbers on the territory of the so-called “balcony” of Mount Everest, a site at an altitude of 8,440 meters, and also inside the so-called “death zone”. This is how historians and climbers call the slopes of the mountain, located at an altitude of 8 km and higher, where most of the climbers died, who did not conquer Chomolungma.

In total, British climbers obtained samples from two dozen regions inside the “death zone” and “balcony” of Mount Everest, which were subsequently successfully delivered to the laboratories of scientists in frozen or liquid form, and then studied in detail. As it turned out, virtually all of them contained “traces of civilization” in the form of microscopic scraps of fibers and plastic particles.

Dozens and even hundreds of such particles were present in those samples of water and snow that were collected near popular climbing routes to the summit of Chomolungma, and five particles of plastic were found in the vicinity of its peak. How they got there, scientists cannot yet say.

It is possible that they were brought there by climbers, but Napper and her colleagues do not exclude that these fibers and particles got to the top of the highest mountain in the world due to the movement of air currents along the slopes of the Himalayas.

“To be honest, I had absolutely no expectations about the results of our study. On the other hand, I was very surprised that we found microplastic particles in all the snow samples that we studied. that Mount Everest was a symbol of purity and primordiality. The realization that we pollute the top of the highest mountain in the world literally opened my eyes, “concluded Napper.