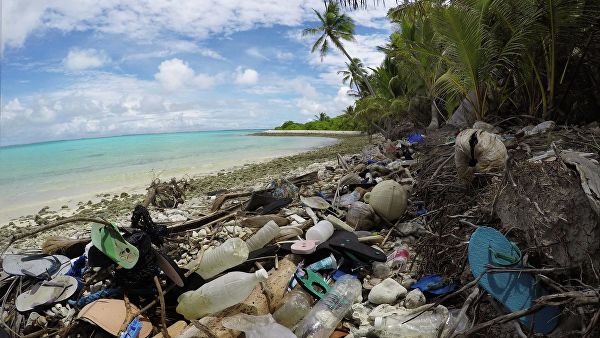 The Indian Ocean and its shores were contaminated with a huge amount of plastic garbage – only on the Cocos Islands, scientists found almost a million drinking straws and shoes, 300 thousand toothbrushes and millions of disposable bags. Their findings and predictions for the future were presented in the journal Scientific Reports.

“According to our estimates, only on these islands there are more than 414 million particles of plastic garbage, whose weight is 238 tons. This is a very conservative estimate, since we have not studied what is hidden on beaches and shores at depths of more than ten centimeters, and simply could not get to the most polluted beaches, “- said Jennifer Lavers (Jennifer Lavers) from the University of Tasmania (Australia).

Today, about 300 million tons of plastic waste, most of which does not decompose by soil microbes, remains in landfills of the Earth every year and remains in an almost intact form for dozens and even hundreds of years. When this garbage falls into the world’s oceans, it falls into huge heaps, similar to the so-called “big garbage patch” in the Pacific Ocean.

For this reason, the last 50-70 years, oceanologists often jokingly called the “plastic period” because of the huge number of microfragments of polymers in the waters of the world’s oceans. As the observations of scientists published in 2014 show, these particles do not linger for a long time in water and, apparently, are eaten by fish and marine animals, and therefore pose a threat to the ecology and human health.

“In 2010 alone, over 12 million tons of plastic garbage got into the world ocean, and about 40% of it was released into the water the same year it was produced. In total, its amount exceeds 5.25 trillion particles, and now you cannot get rid of it in principle, ”adds Annett Finger from the University of Victoria in Melbourne (Australia).

Lavers, Finger and their colleagues found out that these estimates most likely do not reflect the real scale of the problem, having carried out a kind of “census” among plastic debris particles polluting the waters and shores of the Cocos Islands.

This archipelago, as the scientists note, they chose not at random. It is located at a great distance from all the continents and other large patches of land, on its 27 atolls only six hundred people live, and they are hardly visited by tourists. All this made the Cocos Islands an ideal place to assess how the currents carry the garbage and where it ends up.

In total, scientists have spent more than six months on a detailed study of the coast of the seven largest islands of the archipelago. The results of this “census” greatly surprised them – the quantity and mass of garbage, as well as its nature, were greatly underestimated.

Their shores were littered with countless plastic items, from toothbrushes and plastic utensils to slippers, swimsuits and various disposable goods.

Interestingly, only a small part of this litter, about 1.6%, was associated with fishing nets and other fishermen gear. This markedly distinguishes the Cocos Islands from other tropical archipelagoes, where scientists have found large accumulations of debris in past years.

At the same time, only a small part of them lay on the seashore or on the sand – about 26 times more garbage was buried at a shallow depth. Due to this, for every square meter of the surface of the shores of these islands there are about 2.5 thousand plastic particles.

British eco-activist and blogger Rebecca Gilmore on social networks posting photos and videos of the effects of environmental pollution with plastic waste. Carried away by surfing, Rebecca arrived in Bali in search of high waves, but found only an ocean of plastic and beaches covered with debris.

According to the researchers, this discovery suggests that current measures to combat pollution of beaches are practically useless, since most of the particles dangerous to the flora and fauna of the sea, as well as human health, are hidden under sand, and not on its surface.

Scientists hope that their discovery will attract the attention of politicians, and they will adjust these strategies and begin to deal not only with the existing garbage, but also with its main source – manufacturers of disposable packaging and utensils.