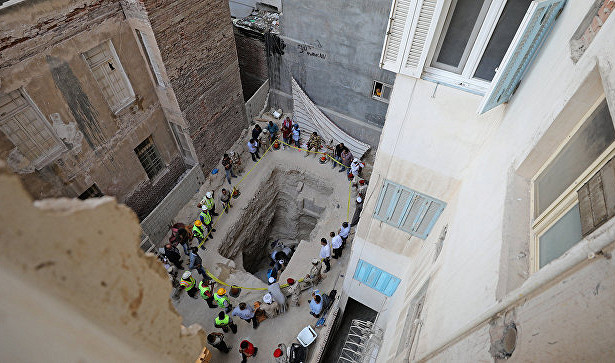 Excavations in Alexandria in the area of ​​detection of a black giant granite sarcophagus of 2 thousand years old must continue, probably there are other burials, said Professor of Archeology, an expert in the restoration of archaeological monuments of Cairo University Mohammed Abdel Hadi.

“It is necessary to continue excavations at the site of the discovery of a black sarcophagus in the area of ​​El-Karimli Street in Sidi Haber quarter, as it can be expected that there are other sarcophagi there, possibly an ancient cemetery where large sarcophagi can be collected,” said the scientist in an interview with the Egyptian newspaper Shuruk.

According to him, it is possible to expect to find in Sidi Gaber burials of other military, politicians or representatives of local authorities.

In early July, during construction works in one of the regions of Egyptian Alexandria at a depth of five meters, a sealed mysterious giant sarcophagus of black granite weighing 25-30 tons and an age of more than two thousand years was discovered untouched by marauders. The find gave birth to a lot of rumors in the world. They talked about the “curse of the pharaoh”, about the evil in the sarcophagus. One of the most talked about versions was the still-uncovered tomb of Alexander the Great.

The Egyptian authorities opened a sarcophagus and found in it three water-damaged mummies, which probably belonged to soldiers who died in battle, presumably IV-III centuries BC.