“ExoMars” will make historical landing on Mars next week 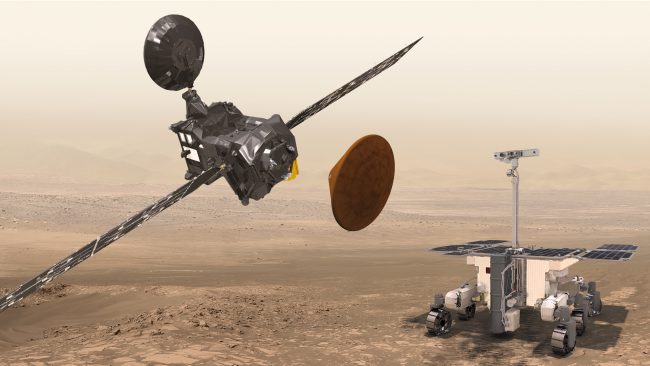 Joint mission of the European Space Agency and Roskosmos arrives to Mars next week and will try to make this flight, and also a cooperation of two large space agencies historical. If everything goes well, NASA will lose the status of the unique space agency which successfully put probes on the Red planet.

ExoMars is the astrobiological mission intended for search of geological and biological activity on Mars. The Red planet it will orbit on October 19. On reaching two components of a mission — the scientific orbital device Trace Gas Orbiter and the landing Skiaparelli module — will go different roads. TGO will come to a low orbit and will begin to scan the Martian atmosphere regarding methane, water vapor and other residual gases. Skiaparelli, meanwhile, will try safe and sound to reach the surface of Mars. 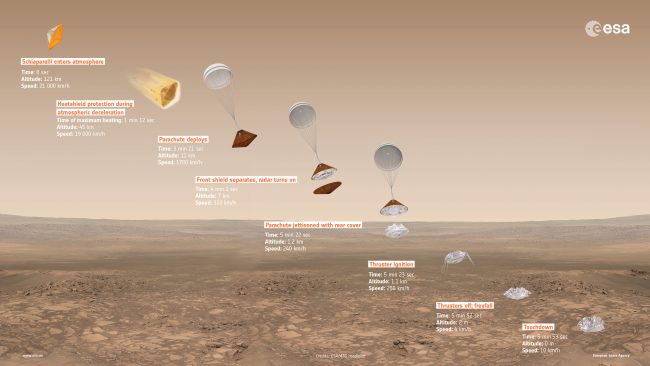 It is difficult to sit down on Mars, and neither the ESA, nor we we have no big track record in these questions. In 60th and 70th the Soviet Union has sent several probes to the Red planet, all of them have broken and have died soon after falling or have disappeared from radars. In 2003 the landing module of the ESA Beagle of 2 villages on a surface, but his solar panels haven’t revealed and the contact with Earth has been lost. In 2011 Russia has launched the space probe which has gone to the satellite of Mars to Phobos. But he hasn’t gone beyond even low Earth orbit, has fallen and has burned down in the atmosphere.

To put it briefly, “ExoMars” should be proved a lot of things and to reach a destination, so to speak, with fair freight of responsibility. On October 16 Skiaparelli and TGO will be divided. In three days the landing module will enter the atmosphere of Mars. The corner shall be ideal, otherwise the probe will heat up and will burn down or will jump aside back in space. If everything goes according to the plan, Skiaparelli will develop a brake parachute, and then activates three sets of hydrazine engines. At the same time it will collect information to characterize structure Martian the atmosphere and the expected place of landing.

All sequence of actions is programmed in advance, and Skiaparelli will have only one chance. If something goes not so, not to correct anything any more, there are no reserve options.

Fortunately for the ESA and Roskosmos, the main objective of Skiaparelli consists in demonstration of technology of landing. If there is a problem, engineers carefully will study it and will learn any lessons till times of the following phase of a mission “ExoMars”: in 2020 from Earth larger and long-living module will shall go. So though all will wait for successful landing next week, failure won’t become catastrophic crash.