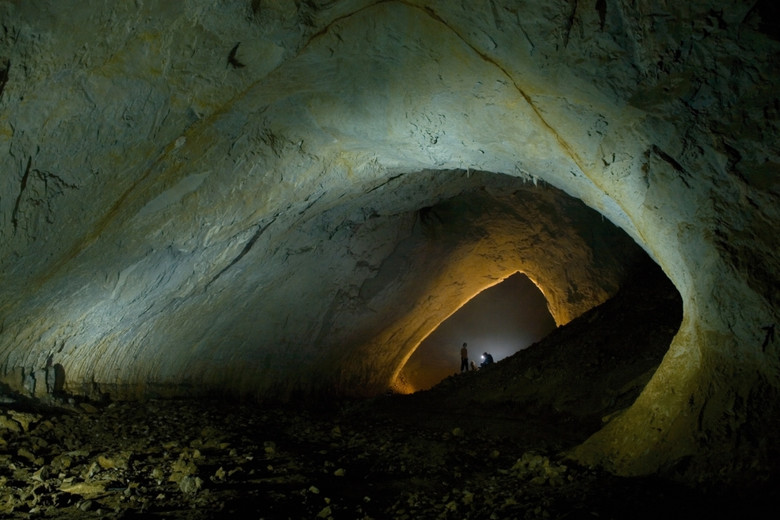 Until recently, it seemed that on Earth, no living beings, which was not known to scientists. We are looking for something new in space, but we must admit that the underground and deep sea world of our own planet are poorly studied. That’s where you can still see the incredible miracles.

Such a miracle for the scientists was the cave Movile in Romania. Five million years to her life exists in conditions in which it is simply impossible.

So, in a Romanian cave Movile in 1986 were found closed ecosystem, not in any way associated with the earthly conditions — no sunlight, no air, no water.

Wikipedia gives the following definition of a closed ecosystem: the “Ecosystem, not involving any exchange of matter with the external environment. In closed systems, any waste products of one biological species should be disposed of at least another view.

This natural wonder was discovered by accident during geological researches before construction of the power plant near the town of Mangalia, located in Transylvania on the Black sea coast. At a depth of 18 m is almost completely flooded cave, geologists discovered a whole world that exists under conditions more similar to alien than earthly.

In the atmosphere of the cave there is almost no oxygen (7-10%), but it is saturated with hydrogen sulphide, contained here in a huge amount of carbon dioxide, methane and ammonia.

Five million years there is this heavenly life on earth, isolated from the outside world. Biosystem wonderfully adapted to the unusual conditions. Instead of the usual photosynthesis, it uses chemosynthesis — way power, wherein the source of energy for synthesis of organic compounds from CO2 are the oxidation of inorganic compounds.

In the confined stone space area of approximately 1 200 m2, of which to date, investigated a total of 300 m2, the scientists found about 50 species of living creatures (micro-organisms, leeches, spiders, Scorpions, insects). Just over 30 of them unknown to science.

It is established that the life in the cave originated during the early Pliocene, then the extinct family man, the Australopithecus, then the first people.

For some reason the cave has been tightly closed, perhaps that is why its inhabitants died during glacial periods. They had to adapt to underground life. And they live for 5 million years in a dark limestone cave with a dirty lake, dividing the surface portion into three isolated cavity. Well at least the water is warm (21 degrees Celsius) due to its thermal springs.

In all living creatures that live in caves, have two common characteristics: they have no color (discoloration), as they live in total darkness, and they are absolutely blind, because without the light the eyesight they do not need. In the space of the underground inhabitants are guided by touch and smell.

As you know, in the dark, acute hearing, so the inhabitants Mawile have learned to detect the slightest vibrations of the stone, air and water. In closed systems its vital laws, and it is very well-developed symbiosis. Each creature helps to exist and develop another.

Aquatic species inhabit approximately 10 cm below the surface of the earth: there is a bit more oxygen than the bottom. And below can only survive organisms with anaerobic respiration, i.e. those in which the energy in the body is produced without the participation of oxygen from outside.

I must say that those who receive more oxygen has changed, compared to anaerobic, less. Among them are endemics only 25%. Hence it can be concluded that the sea or river water has been here for some time after the cave was cut off from the world.

These bacteria feed on other heterotrophic bacteria and fungi. The latter then merged into the bacterial mats and films, covering the cave walls and water surface. These mats serve as a kind of pasture for other more developed living creatures: isopods, pill bugs, Scorpions, which, in turn eaten by centipedes and spiders.

Underwater bacterial film built up its own food chain are worms, crustaceans, snails, and above them — leeches and water Scorpions.The snails here are extremely resistant to hydrogen sulfide and eat the bacterial film water Scorpio preys on crustaceans carnivorous leech devours snails, worms, and other invertebrates. 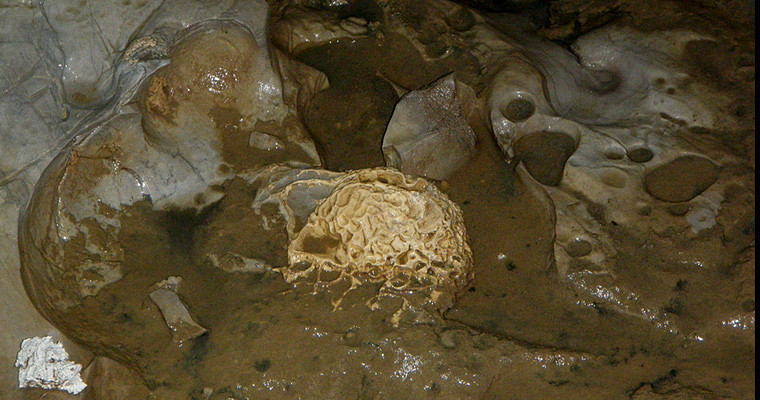 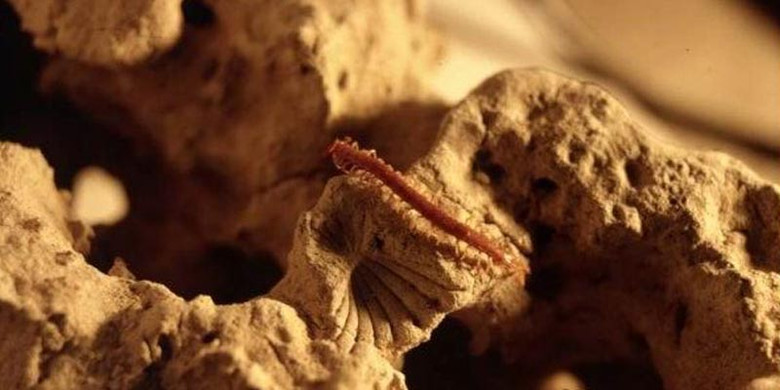 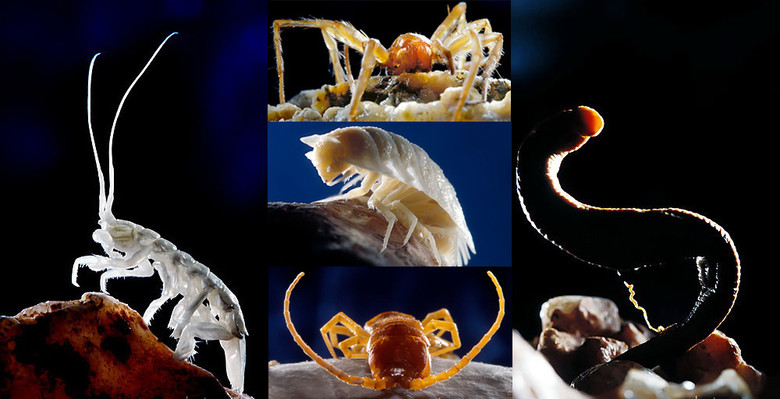 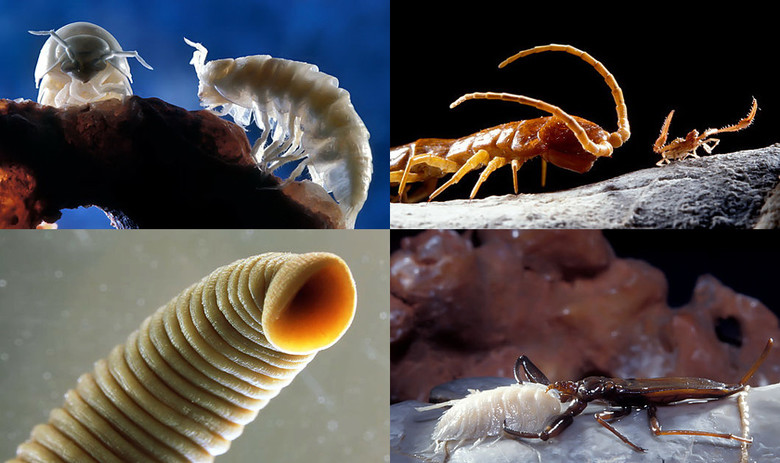 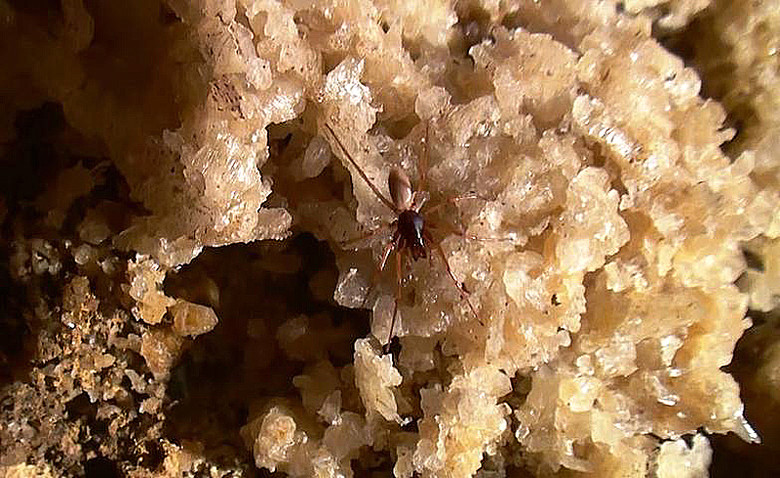 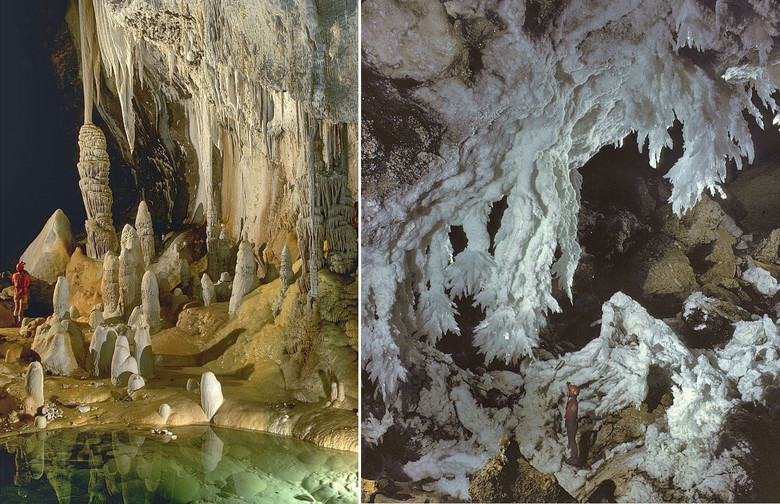 And I must say, this whole ecosystem works pretty productive. On 1 m2, the researchers counted 1,5 thousand of spring tails, which were hunted blind spiders, very reminiscent of their counterparts living in the Canary Islands, only sighted. Does this mean that in the Pliocene was about the same climate?

A long stay in the cave Mobile is for a person in mortal danger, it’s understandable, given the atmosphere in it. And for the life of the ecosystem, they are harmful. Only one breathing process, the caver can cause an imbalance of the gas composition of the atmosphere in the cave.

In order to preserve this miracle of nature access to the caves is allowed only to scientists and researchers in special sterile suits with diving. They may visit the site only twice a month a group of three people. The cave is carefully guarded from people and influence the external environment. This inlet has two air-tight hatch.

Some researchers argue that to date the world’s only known two closed ecosystems: global and cave Movile. But no, it’s not so bad. Scientists distinguish at least two ecosystems that exist in similar conditions.

In the state of Tabasco in southern Mexico there is a cave with a Sour, which is a maze with length of 2 km. It is sometimes called the cave of the lighted house, as in some places it still gets daylight through crevices.

Absolutely terrible picture awaits those who dare to visit this nasty place: the walls and ceiling ooze the real sulphuric acid, on the walls hanging everywhere colored slime, in some places forming a gelatinous stalactites.

Complements all of this a disgusting smell of hydrogen sulfide. Sulfuric acid here is the result of oxidation of hydrogen sulfide released from the ground and react with water. This acid had eaten into the limestone such a huge tunnel.

However, life exists in these non-conditions. Here, as in Mobile, live bacteria oxidizing hydrogen sulphide and receiving energy. The slime on the walls are hordes of different bacteria, but there are still live mites and worms that eat bacteria. On the walls of the live larvae of flies, of which there are so many that you can hear it buzzing.

But, unlike Mobile, in acid cave can be found more highly developed animals. In the Creek at the bottom of the cave floating flocks of fish-eating bacteria and the larvae of midges. Although the very existence of fish in the sulfuric acid solution seems incredible! In the upper part of the cave that receives some air, is inhabited by six species of bats.

Scientists have not been able to figure out where the hydrogen sulfide. There are two hypotheses or it comes from oil fields in the vicinity, or blame the volcano El Chichon, is also located nearby.

Another similar ecosystem located in the cave of Lechugilla in the United States. This is one of the deepest caves, its length in the depth is 0.5 miles away Lives, it also completely isolated from the outside world in its atmosphere contain! a huge amount of hydrogen sulfide.

Only, unlike the two other caves, in Lechugilla there are lakes with crystal clear water But this clarity is deceptive: the water uninhabitable for normal occupant! the aquatic environment. However, the reservoirs are quite populated by bacteria that feed on… manganese. The walls of the cave eats the other kind of bacteria.

No wonder that this ecosystem has caught the interest of NASA. They hope to get the answer to the question is there life on other planets, where there is no oxygen and organic food. And caves, such Movile perhaps ways to persuade scientists to a positive response.