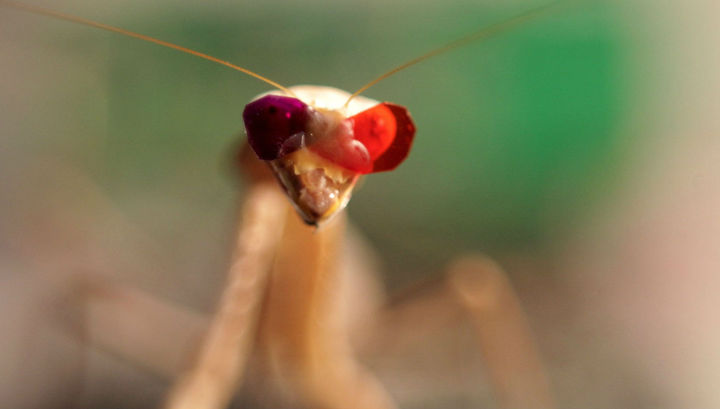 It is known that our eyes see the world from different angles, and the brain, by combining the two images into a single whole, uses small differences to determine the distance to the surrounding objects. In addition to humans stereoscopic vision is possessed by many mammals, birds and reptiles. But among the insects there is only one species that perceives the surrounding space in a three-dimensional (three-dimensional) form, is a mantis.

A year ago, researchers from the University of Newcastle, led by Jenny Read, demonstrated for the first time that mantises have a binocular visual system. Scientists created a real 3D-cinema for insects and with the help of beeswax they fixed tiny stereo glasses on the head of the praying mantis. On the screen before the subjects constantly flashed figures, similar to beetles, and when they appeared directly in front of the mantis, they took them for food and tried to attack.

In a new study by the same team, biologist Vivek Nityananda and his colleagues found that the stereoscopic vision of the mantis works completely differently than in other animals. 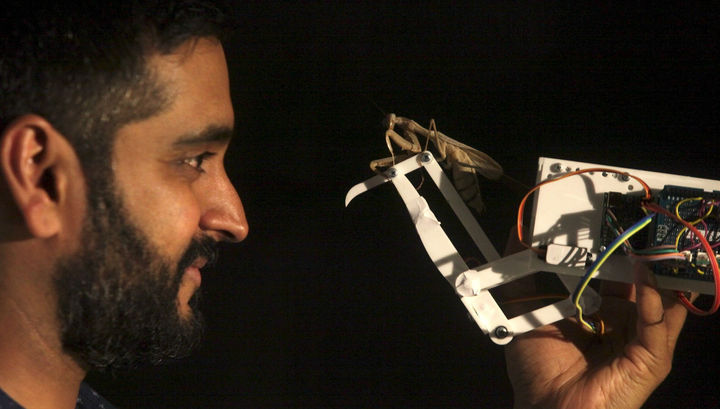 People perfectly see three-dimensional immovable objects. For this purpose our brain unites in a single whole the smallest details of the image obtained from each eye. But in the course of experiments, scientists drew attention to the fact that the mantis attacked only moving images and completely ignored the “beetles” frozen in place. Further analysis showed that insects do not care about the details of the surrounding world, but simply look in the field of view for something mobile.

Then the researchers conducted an additional series of tests involving 20 mantises, during which each eye of the insect saw a different picture. People in such trials are very difficult to navigate, because our brain can not compare different images. But the mantis continued to confidently rush to the victim, when she was a couple of centimeters from them.
“This is a completely new form of 3D vision, because it is not based on static images, but on the change in time,” Nityananda says in a university press release. “It is probably necessary for a praying mantis to answer the question of whether the victim is close enough, to catch her? ”

More details of the results of the study can be found in an article that was published in the publication Current Biology.

The project in which the study was conducted is not limited to an analysis of the features of the mantis view. One of its goals is also the development of a concept for fundamentally new vision systems for robots. In this vein, the new discovery of scientists looks very promising.

Modern robots are equipped with systems that mimic human vision. Obviously, it is more complicated than an insect and its imitation requires high costs, for example, in computer processing of images. It is possible that it is thanks to the bomoglaws that the authors of the Vesti.Nauka project (nauka.vesti.ru) will soon be able to write about autonomous vehicles equipped with awesome “sight”, drone robots and robotic surgeons.