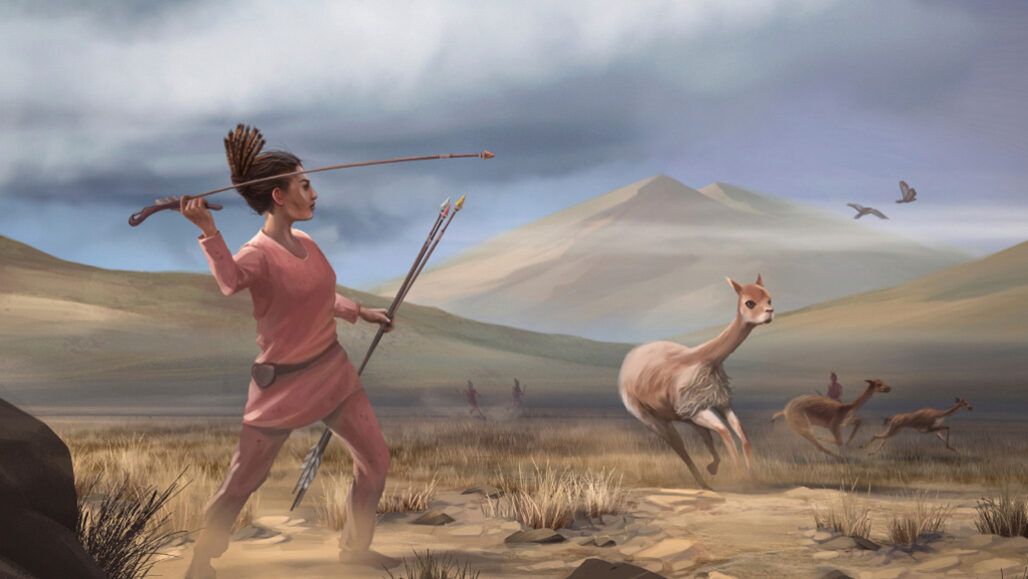 A woman buried 9,000 years ago with her hunting toolkit is shedding new light on gender roles

A woman buried with spearpoints and other hunting tools roughly 9,000 years ago in Peru’s Andes Mountains has reemerged to claim the title of the oldest known female big-game hunter in the Americas. Her discovery led researchers to conclude that, among ancient Americans, nearly as many females as males hunted large animals — a finding that is challenging long-standing ideas about ancient gender roles.

Modern and recent hunter-gatherer societies emphasize males hunting. But in mobile groups that inhabited the Americas thousands of years ago, up to half of big-game hunters were women, archaeologist Randall Haas of the University of California, Davis and colleagues report November 4 in Science Advances.

Until now, many researchers have regarded stones sharpened to a point and other typical hunting items placed in ancient women’s graves as cutting or scraping tools. The dominance of male hunters in modern hunter-gatherer populations has fueled a tendency to, in essence, give ancient men the spearpoint and ancient women the short end of the stick.

“It is time to stop thinking of [ancient] female large-game hunters as outliers,” says archaeologist Ashley Smallwood of the University of Louisville in Kentucky. Gender roles in modern hunter-gatherer groups can’t be assumed to apply to those that lived long ago, Smallwood says.

While much remains unknown about gender roles in ancient hunter-gatherer groups, Haas’ view began to take shape in 2018. His team, collaborating with members of a local community at a high-altitude site in southern Peru called Wilamaya Patjxa, unearthed five human burial pits containing six individuals. One pit held a 17- to 19-year-old young woman who had been buried with a set of stone tools for big-game hunting. Her toolkit included four spearpoints that would have been attached to shafts and likely hurled at prey using hand-held spear throwers. Other stone implements, and a pigment chunk, buried with her were probably used to cut apart game, extract bone marrow or scrape hides and perform detailed hide work and hide tanning.

Sediment used to fill the pit once the woman was interred contained bone fragments from various large animals, such as Andean deer and wild relatives of the alpaca known as vicuña. Those two animals were the main targets of ancient hunters in that part of the Andes, Haas suspects.

Another pit containing the remains of a 25- to 30-year-old man included two spearpoints, suggesting he had had also hunted large animals.

The sex of both hunters was identified with the help of female- or male-specific proteins extracted from the teeth.

To better understand the extent of ancient female hunting, Haas’ group reviewed evidence from 429 excavated individuals buried at 107 sites, including Wilamaya Patjxa, throughout the Americas. These locations ranged in age from around 6,000 to 12,500 years ago.

Among individuals of known sex buried with big-game hunting tools, 11 were women from 10 sites and 16 were men from 15 sites.

Given that admittedly limited dataset, the researchers estimate that, on average, females accounted for between 30 percent and 50 percent of ancient American big-game hunters.

Questions remain about whether the sample of ancient individuals in Haas’ study reflects how often females actually participated in big-game hunts, cautions archaeologist Patricia Lambert of Utah State University in Logan. But the toolkit found with the Wilamaya Patjxa woman “indeed suggests that she hunted and processed large game animals,” Lambert says.