Female chimpanzee began to care for a dead relative 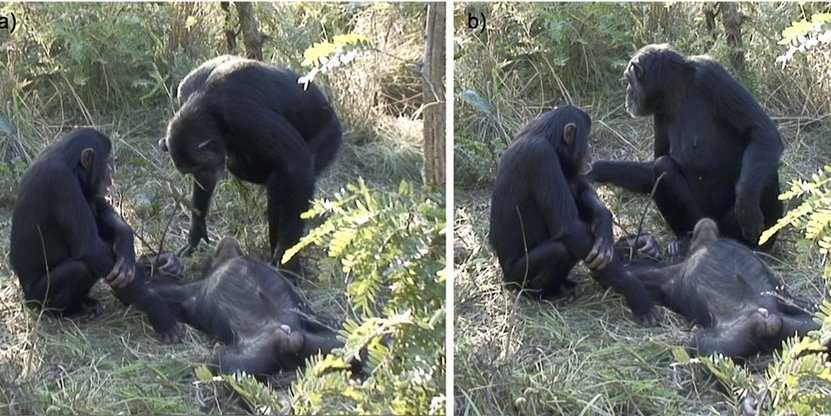 During observations of chimpanzees living in the Chimfunshi Reserve in Zambia, scientists drew attention to one strange feature. A 33-year-old female named Noel started brushing her teeth with a blade of grass to her late stepson, Thomas, who died of a lung infection. Generally, the death of a congenitor aroused the interest of many chimpanzees, and they approached the body several times. However, only Noel began to perform a kind of ritual. It was located near the head of Thomas, unclasped the teeth of the deceased and began to rub them with the hard end of a blade of grass. This lasted about 30 seconds. After that Noel licked the blade of grass, and then repeated the action with the deceased chimpanzee. At the end, the adoptive mother licked the blade again.

This seemingly insignificant action can have great consequences for science. According to experts, this behavior of animals can shed light on how the funeral rituals originated in people. However, other experts believe that everything is somewhat simpler: chimpanzees continued to interact with their dead kindred on the habit. We probably will not get the answer to this question soon. We add that during the “ritual” of cleaning teeth next to Noel was her daughter Nina.

There are two kinds of chimpanzee: common chimpanzee and bonobo (or dwarf chimpanzee). Groups of these animals usually number 10-12 individuals. Now both species are threatened with extinction.

It should be noted that chimpanzees often surprise us with their behavior. One of the most unusual stories occurred in the Senegalese savannah. Chimpanzees did not just brutally kill their former leader, but also partially ate his body.

Cruelty, by the way, is an integral part of the life of chimpanzees. Another group of scientists not so long ago found out that wars between packs rally chimpanzee collectives, and also make these animals happy.