Feral goldfish have captured the waters of Australia 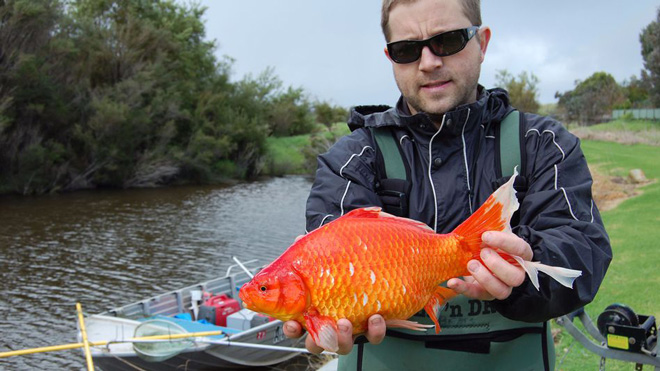 Many people believe that releasing a goldfish in the river is a harmless trifle. But the reality is scary — cute fish may grow to the size of a soccer ball and oppress native species.

Scientists from the University of Murdoch (Australia) watched the goldfish in the river Vassa in the South-West of Western Australia for 12 years. They found that invasive species harm the local fish and the surrounding ecosystem. Stephen Beatty and his colleagues spent a year studying the little-known behaviors of goldfish in the wild.

Beatty said the study was conducted due to a sharp rise in the number of aquatic species, which was found in the river Vass for the past 15 years. “Thank you” for the distribution of fishes it is necessary to tell the people who released former Pets in ponds and rivers.

Goldfish in nature are becoming omnivores, and their eating habits can become destructive. They reduce the quality of the water, shaking the sediment at the bottom of the river, dig up plants and eat everything that will fit. including eggs, fish-natives.
Moreover, goldfish compete for space and resources with native species and spread disease.

But the most striking fact is the huge size of that cute goldfish reach in nature, and their ability to travel long distances. One individual that found the scientists weighed 1.9 kg and size equal to a football ball, the other did a marathon length of 230 km for the year.

How to remove goldfish from a river? Methods include trapping with nets and electrofishing fish, but invasive species will suffer and local. It is best simply not to release aquarium fish free.