Fishes are subject to optical illusions 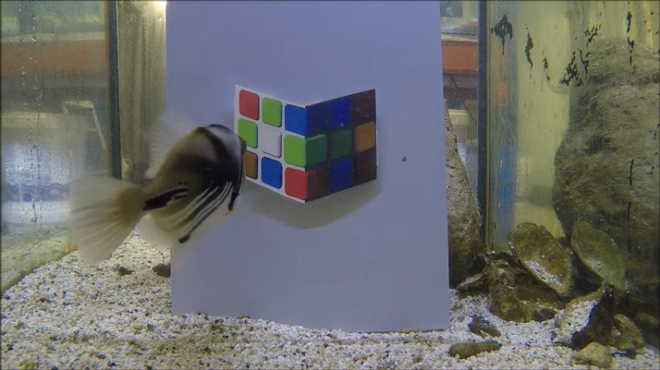 Scientists from School of biological sciences at university of Queensland and Kvinsledsky institute of a brain found out that fishes of family spinorogovy (Latin Balistidae), widespread in waters of the Great Barrier Reef, as well as we, can be deceived by optical illusions.

According to doctor Karen Cheney, illusions represent the most interesting area for researches. “They show situations when our brain isn’t able to perceive true properties of what we consider, from the point of view of color, brightness, the size, a form and the movement” — she told. — “It isn’t absolutely clear why we see illusions, but there are several different ideas. In general it is known that they happen because of processes on a retina or in nervous ways is closer to a brain”.

In an experiment which still confuses observers and it isn’t up to the end explained with science, the orange square on a cube seems other than a brown square sideways though actually their color and brightness are identical. Scientists believe that illusion happens because brown color is perceived in a shadow and therefore our brain codes it more darkly than “orange”.

To learn whether fish will apprehend this imaginary difference in color, the team used behavioural experiments with an award in the form of a nutrition.

At first fishes were taught to swim up to couple of squares in which one was brown, and another orange, other part of the image at the same time was filled with a gray background. Four fishes were trained to peck an orange square, and others four — brown. in case of “hit” in “the” square fish received a forage. Then showed to fishes a cube where all colors were different, but wasn’t orange — instead of it there was identical brown on color, but a fragment seeming “orange” on shady side. As a result of an experiment it turned out that fishes accept brown for orange as the fishes accustomed to orange more often chose brown on light the parties too, and to brown — brown on dark. In other words, examinees chose “the” square.

It is quite curious, doctor Cheney considers that, apparently, different types perceive deceptive things similar to people. As a nervous system of fishes less difficult, it is quite possible that at least a part of their main mechanisms of an illusory perception was created at early stages of visual evolution.