Flies were able to navigate the sun 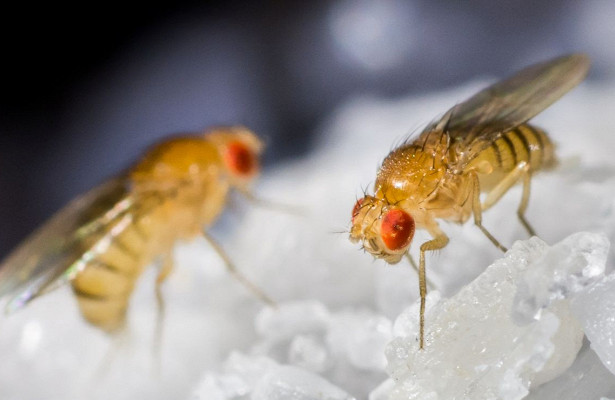 Ordinary fruit flies-drosophila live everywhere, right up to the desert, and can fly over distances of more than 10 kilometers along the most unprepossessing terrain. Scientists observed this behavior a few decades ago in the Mojave Desert, where it would seem that there are no clear and simple landmarks that insects can use. Only now it is discovered that the fruit flies manage not to get lost in space thanks to … the Sun. This is reported in an article published in the journal Current Biology.

Michael Dickinson (Michael Dickinson) and his colleagues from the California Institute of Technology conducted experiments with flies in the laboratory. The scientists arranged for them something like a “flight simulator” in which they could “move” through the unlimited virtual space of the “desert”, heading and flapping their wings in the stream of air, but in reality remaining fixed on the spot.

Experiments have shown that flies choose the direction of flight so that a small bright spot against the background – the conditioned Sun – remains to it at a constant angle. Moreover, insects memorized this orientation and, if temporarily the “Sun” was disconnected, lost it, and when included again – easily returned to the original direction. What is characteristic, every fly had its own: each flew in its direction, but at the same time knew exactly where, guided by the light.

This ability requires the presence of specialized neurons: indeed, their role can play the E-PG cells, not so long ago identified in the brain of Drosophila. Michael Dickinson and his co-authors managed to suppress the work of these neurons, which “turned off” the flies and the ability to complex the orientation of the Sun. Instead of choosing and keeping the exact angle, the insects simply flew strictly in the direction of the light.

In addition, scientists have obtained GM-lines of flies, E-PG-neurons of which fluoresce simultaneously with the manifestation of activity. While the fruit flies remained in the “flight simulator”, the researchers observed these cells through a miniature hole and confirmed that the neurons are involved in keeping the right direction to the Sun.