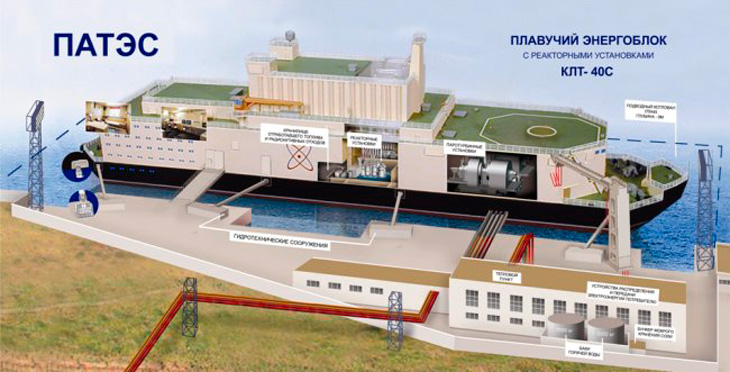 The world’s first floating nuclear plant, designed to resist tsunamis and earthquakes, like those that caused the Fukushima disaster (2011), will be opened in the Russian far North — the Chukchi Peninsula and will begin producing electricity in 2020.

“At the moment the platform with two reactors on Board passes sea trials in the dock, which will be completed by the end of this year or in 2017-om”, told EFE Georgy Tikhomirov, Professor, Moscow Engineering physics Institute (MEPhI), national research nuclear University “MEPhI” — approx. ed.).

Then the plant will be towed from St. Petersburg to the most Northern city of Russia — Pevek (Chukotka), which is located in a sheltered Bay to replace a conventional power plant.

“The construction of the necessary port infrastructure for installation of the floating nuclear power plant started at the end of 2015. Before install the supports for the platform, you must bring the power line to transmit power in a General network,” he explained.

The Professor expects that “by 2020 floating nuclear power plant will produce its first kilowatt of electricity,” calling this period the “real” regardless of fluctuations in the economy.

The barge, which is installed as both a nuclear reactor is 144 meters in length, 30 in width and 6 metres in precipitation and a displacement of 21 thousand tons. “It’s like a cruise. Staff will live on the platform in the conditions of a four star hotel, with all conveniences, because they have to spend in the cabins whole year”, — said Tikhomirov.

With regard to reactors (KLT-40C), each of them has a capacity of 40 MW and they can work simultaneously and will have fuel capacity for Autonomous operation for three years.

“Every three years is an overload of fuel, and every twelve conducted full maintenance. It is assumed that the lifespan of nuclear power plants — 40 years” — the interlocutor reports EFE.

The station will use low-enriched uranium and spent fuel will be accumulated on the platform. According to the Russian physicist, floating nuclear power plants are able to produce the same amount of electricity as regular.

Tikhomirov believes that established on the platform of the reactors are “totally safe”, which proves their trouble-free operation for many years aboard “at least three nuclear icebreakers”.

In case of tsunami or earthquake, a nuclear power plant rises above sea level. “The reactor units are compact and Autonomous. It is not that the reactors were installed at Chernobyl, of course. Scenario at the Fukushima scenario is also possible”, — says the scientist.

The expert explained that in case of danger of tsunami or aftershocks that “unlikely” in the Arctic, “the plant will be raised above sea level by using a solid support on which it is installed”.

“This is a complex technical solution, but it guarantees both safety and uninterrupted supply of electricity,” he said.

Greenpeace, by contrast, believes that such stations are real “bombs”, as they accumulate large amount of uranium, and, in addition, a “gift to terrorists”, and thus to protect them would require a Navy that will make the project extremely expensive.

“Until now, there was no attempt to seize a nuclear power plant. In addition, the Chukotka region because of its remoteness is a very safe place,” recalled the scientist.

In addition to supplying environmentally friendly electricity to remote areas, the floating NPP can produce heat, which will allow to abandon the use for these purposes, coal, gas and oil.

Research resources in the Russian Arctic

The success of this first project will depend on whether the Russian government the construction of the remaining planned floating nuclear power plants — although Rosatom has prepared documentation for 5-7 mobile platforms for “research resources in the Russian Arctic.

“The advantage of a floating nuclear power plant is that it can be moored almost anywhere where there is a power line”, — said Tikhomirov.

He believes that “if the Arctic offshore oil would be found, (…) the most logical would be to establish a floating nuclear power plant”.

“Why? Yes, because a conventional power plant will cost much more,” says the Professor and adds that the melting of Arctic ice and the opening of the Arctic sea route as an alternative Soetomo channel will instantly increase the demand for floating nuclear power plants on the market.

Tikhomirov believes that such installation could become a “good commercial product”, but considers “premature” to talk about their exports, although such countries as Chile, Brazil or Indonesia, have already expressed interest in the project, and China decided to launch their version of floating nuclear power plants.

The United States launched in 1968 floating nuclear power plant (Surgis) in the Panama canal zone, which was decommissioned in 1976 for the first time because of the high cost of its contents.

Greenpeace believes that the floating nuclear power plant is a ticking time bomb,
since they accumulate large amount of uranium, as well as how
“gift to terrorists”.