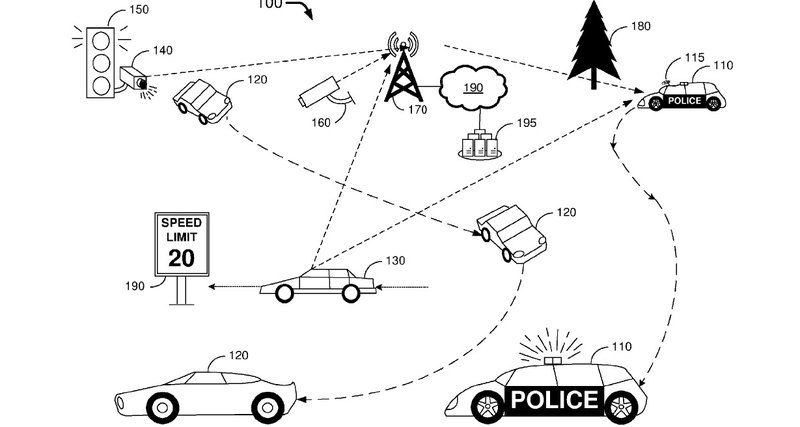 The US Patent and Trademark Office (USPTO) registered Ford’s patent application for an autonomous police car with artificial intelligence. Although in the pictures it looks rather funny, the functional is supposed to be very, very serious.

The patent application states that a robotic police vehicle can be operated both with police officers on board and in a fully autonomous mode. The image of this “Robocop on wheels” in the patent application as if drawn by the child and represents a hatchback of absurd proportions on five-spoke disks. But appearance here, of course, it’s the tenth thing – the filling is important.

And it’s quite interesting, because Ford plans to use artificial intelligence to catch violators. The onboard equipment of this patrol car is able to measure the speed of cars, read registration numbers and check them with the police base, connect to stationary high-speed cameras and street surveillance cameras, communicate with police crews and transmit information to them in real time.

If this is not enough for you, then the patent application mentions that the robotic machine is smart enough to find secluded places and arrange ambushes for offenders – for example, to measure speed by hiding in bushes. The car can pursue the villains both independently and with the support of other crews. And Ford also provided for the possibility of intervention in the driving of the violator.

Yes, the robotic police car can allegedly be able to forcefully stop the desired car by remote connection to its control electronics. Or take on the control of the car of the intruder – here how the artificial intellect will decide. The machine will even have the right to determine the punishment for the offender – the amount of the fine or the period of deprivation of rights. Fortunately, while all this remains only a fantasy.