Found a type of neuron that only primates have

Biologists have discovered a type of nerve cell that only primates, including humans, have. The discovery could shed new light on the origin of the mind. It can also help in the creation and testing of drugs for mental illness.

Brain cells are very diverse. So, in the human brain, neuroscientists have dozens of types of neurons, differing in subtle structural details.

For example, not so long ago, biologists examined 24 thousand cells from two regions of the mouse brain. It turned out that they are divided into 133 types. That is, of these 24 thousand neurons, there were on average only 180 of each type. But there are about a hundred million neurons in the mouse brain, while in humans it is thousands of times more. Who knows how many varieties of nerve cells there are in the brain?

To find out, one could try to classify all nerve cells in the brain according to the gene expression profile. But this task is not yet within the power of science. However, biologists regularly do smaller “censuses” and usually find something interesting. 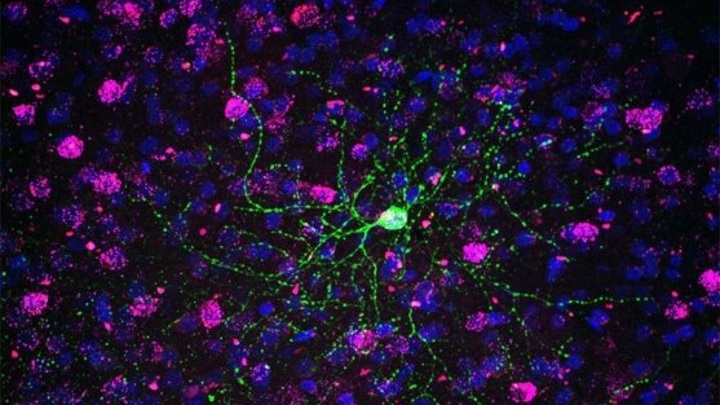 A single neuron in the marmoset cerebral cortex and its processes (highlighted in green).
Illustration by Kirsten Levandowski, Heather Zaniewski.

This time, the scientists focused on a large and important class of neurons called interneurons.

The authors of the new work studied a total of almost 189 thousand individual interneurons taken from mammals of five species. Three of them (Homo sapiens, rhesus monkeys and common marmosets) are primates. Two more are the house ferret and house mouse.

The researchers sequenced (“read”) the RNA of single cells. This made it possible to find out which genes in the neuron function and which are inactive. After all, the job of genes is to become an example for the synthesis of RNA molecules. And the latter serve as models for the synthesis of proteins that control all cell activity.

Note that the required neurons were extracted from the cortex, hippocampus, and striatum of the human and animal brains.

The striatum is a very ancient area of ​​the brain that appeared in vertebrates even before they came to land. It is all the more surprising that it was there that researchers discovered a new type of neuron that is found only in primates. Moreover, these cells make up a third (!) Of all interneurons of the striatum of primates, including humans.

This is an amazing result. The human brain differs from the brain of other mammals primarily in the enormous size of the cortex. And the cortex really plays a defining role in the functions that make us human: thinking, speaking, and so on. It would seem that at the cellular level, we should have found the most radical differences there. But instead, researchers have discovered differences in the evolutionarily ancient striatum.

This area of ​​the brain is known to play a critical role in generating feelings of pleasure. In addition, she is involved in the management of purposeful movements and many other processes. It is still difficult to say what function the new type of neurons perform in all this. But there is no doubt that scientists have received another intriguing piece of the puzzle called “What it means to be human.”

Doctors have a reason to think too.

Moreover, some studies show that the striatum plays an important role in the onset of schizophrenia.

Recall that mice are a common subject of experimentation in drug design and testing. But now it turned out that every third interneuron of the human striatum belongs to a type that is not found in rodents. So shouldn’t drug developers rethink their approach?