Found a way to communicate dogs with horses 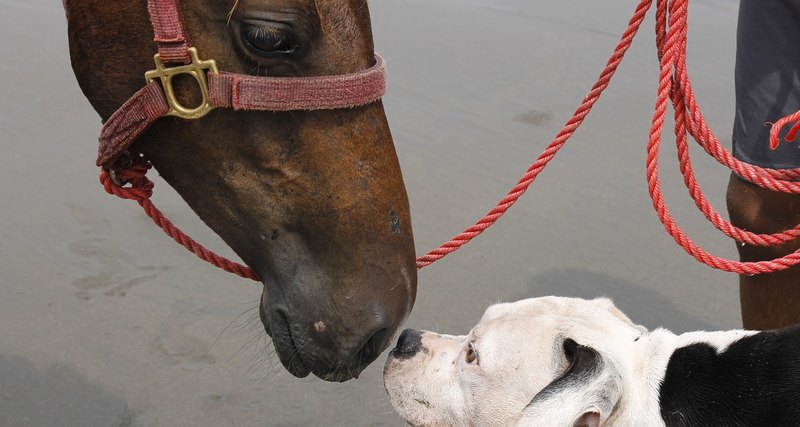 Sociobiologists from the University of Pisa have found that dogs and horses playing together can communicate with each other using facial expressions.

Games are widespread in animals and birds – they help to work out key aspects of behavior, relieve stress and build relationships. During the game, animals communicate with each other using bodily gestures and facial expressions. But so far, studying the game behavior of animals, scientists have focused on games between individuals of the same species or between domestic animals and people.

Italian researchers decided to go the other way and see how horses and dogs communicate with each other during joint games. To do this, they used YouTube, selecting twenty videos there, demonstrating how twenty different pairs of dogs and ponies play freely without human intervention.

When studying the videos, it turned out that during joint games both dogs and horses often show each other a relaxed open mouth, which is a common manifestation of game facial expressions for mammals. They also take vulnerable poses, for example, riding on their backs, which can be interpreted as a sign of friendly disposition.

In addition, sociobiologists quite unexpectedly noticed that dogs and horses during the game often repeat each other’s facial expressions. Such mimicry during the interaction of individuals of various species is observed by scientists for the first time. In earlier studies, it was found that in dogs this behavior is often manifested in relation to friendly individuals and rarely with strangers. But in the games of dogs with horses, copying of facial expressions occurred almost as often as between two friendly dogs.

From all this, scientists conclude that during the games animals, even despite species and evolutionary differences, are able to develop common communication in order to avoid misunderstanding and accidental aggression.