Found dinosaur with a beak and curved horns 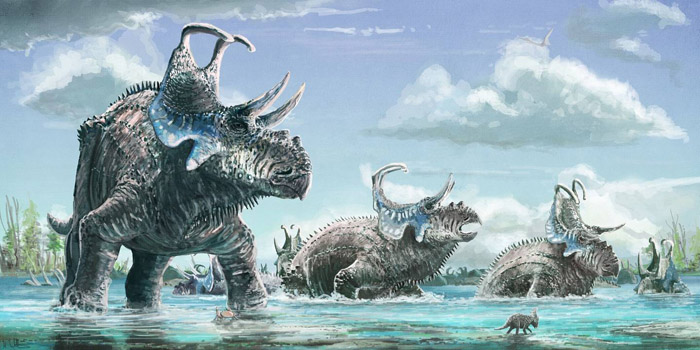 Fossils found in the American state of Montana about ten years ago, were the remains of a previously unknown species of dinosaurs with a powerful shield charm on his head and curved horns.

Despite the fearsome appearance, this four-legged reptile was a herbivore, his description of a paleontologist at the Canadian Museum of nature, Jordan Mallon (Mallon Jordan) and his colleagues published in the journal PLOS One. The authors took the dinosaur to the family of ceratopsia, which includes the widely known Triceratops, giving the new species the name Spiclypeus shipporum. The generic name can be translated from Latin as “spiked shield”, the species was given in honor of bill Shipp Bill Shipp), who found the remains.

Discovered fossils Dating from the age of about 76 million years, comprise about half of the skull, the fore and hind limbs, and part of the spine. Once such clavaste dinosaurs were numerous and diverse. However Spiclypeus shipporum distinguished from other known representatives of this group unusual orientation and form of the horns, curved in the manner of swords and aimed to the sides and bottom. Unique and spikes running along the edge of the head shield: their orientation alternates, so that one is oriented forward and the other back. This allows paleontologists to consider it a transitional form between the early and late ceratopsidae, differing in the orientation of these spikes.

A study of the remains revealed other nuances of life Spiclypeus shipporum. At the time of the death of the dinosaur was 10 years old. The upper bone of the front limb has preserved the traces of infectious arthritis and osteomyelitis. Paleontologists can’t tell how was the injured limb, but it definitely hurt this dinosaur for years, and might have become useless.

Spiclypeus shipporum has become the ninth species of dinosaurs found in the formation Judith river in the territory of Montana. These rich fossil deposits attract attention of both specialists and ordinary “hunting for dinosaurs”, among which was bill Shipp. His discovery he made in 2005, and in 2015 was sold to a canadian Museum. It is worth saying that the contribution Shipp in the opening is worth it to celebrate it in the name of a new species of dinosaur: the enthusiast quickly realized the importance of the findings, have invested their own funds in a professional excavation and preservation of the remains, attracted to the work of volunteers and paleontologists.