Found the common ancestor of all vertebrates

Chinese scientists have discovered fossils of a primitive animal is an ancient ancestor of chordates, echinoderms and other vtorichnaya.

Microscopic fossil discovered by Chinese and European paleontologists, dated about 540 million years ago and is defined as Saccorhytus coronarius, the most primitive voicenote. It is a multicellular animal difficult to see with the naked eye, its size does not exceed one millimeter. However, under the microscope in front of Huang Hai (Hai Huang) and his colleagues appeared perfectly preserved and delicate details.

It should be clear that the group vtorichnaya animals today are all chordates, including us: during embryonic development, our primary mouth becomes anus and mouth occurs later and at the opposite end of the embryo. Have PERVICHNAYA mouth will not “moved”, these include worms, mollusks, arthropods and other animals. The oldest of vtorichnaya and describe Hai Huang and his colleagues in an article published in the journal Nature.

The creature was like a tiny bag with a huge mouth opening. Scientists suggest that it was covered with a thin skin and had a simple muscle system that allowed him to shrink and move the sand to the sea in search of food. Thus anus have Saccorhytus, and from the waste it dumped, apparently, scattering them through the same mouth. 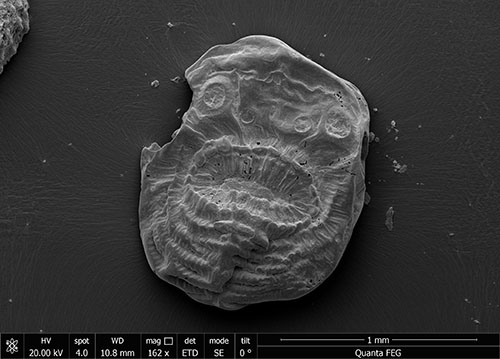 “All vtorichnaya have a common ancestor, – said one of the authors of the findings, a Cambridge researcher Simon Morris (Simon Morris), and we think that we have before us is the one.” Conical tubercles on the body could be the beginnings of the gills, which many years later will develop in fish. Prior to this momentous moment from the time Saccorhytus remained not so much: between 520 and 510 million years ago were the ancestors of the major groups of modern vtorichnaya, including sea stars and chordates.