Found the first ever cemetery of giant extinct creatures 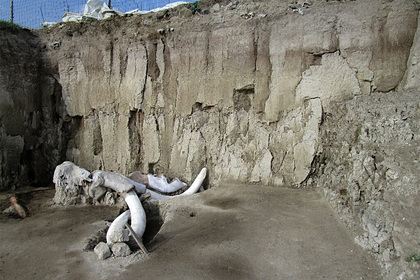 Archaeologists have discovered the largest burial of the remains of mammoths, which contains 800 bones belonging to 14 extinct animals. Researchers believe that they found the first pit trap created by ancient people. This was reported in a press release on Phys.org.

A trap located on the territory of the modern Mexican city of Tultepec was built 14 thousand years ago to capture herbivores. Some bones show signs of damage that are evidence of hunting. According to scientists, at least five herds of mammoths, as well as horses and camels, lived in the surrounding territory. Burial is the largest such discovery in the history of excavations.

In 2018, it was reported that Russian paleontologists discovered a carcass of a foal in Yakutia, whose age reaches 30-40 thousand years, as well as the remains of a mammoth with soft tissues. The good condition of the horse’s body lying in permafrost makes the find potentially suitable for cloning an animal.